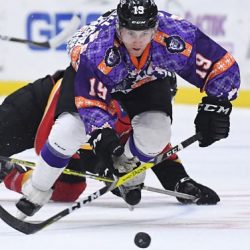 The Reading Royals have announced that forward Justin Crandall has been selected to represent the Royals in the 2017 CCM/ECHL All-Star Classic presented by I LOVE NY at Glens Falls Civic Center in Glens Falls, N.Y.

Crandall, a second year pro from Lakeville, Minn., is currently third on the Royals with twenty-six points (10g-16a) in twenty-five games. He leads the team in plus-minus at plus-14 (+14). In his last seventeen games, Crandall has notched twenty-three points (9g-14a) and played to a plus-17 (+17). Crandall, who has registered multi-point performances in his last four consecutive games — which include two separate four point nights — was named the ECHL’s Player of the Week (12/26/16 – 01/01/17) earlier in the day.

The ECHL All-Star Classic will feature the host Adirondack Thunder taking on the ECHL All-Stars in a non-traditional format featuring 5-on-5, 4-on-4, and 3-on-3 play, as well as a Skills Competition (Puck Relay, Hardest Shot, Fastest Skater) to highlight the talents of both teams.

The game will air LIVE exclusively on NHL Network on Wednesday, January 18, at 8 p.m.

On Wednesday, January 18, the day’s events include the ECHL Hall of Fame Luncheon and the 2017 CCM/ECHL All-Star Classic presented by I LOVE NY. Select ECHL Skills competitions will be held the same night and will be incorporated into the evening’s events.

The starting lineup is determined in a vote of coaches, team captains, media relations directors, broadcasters and members of the media. Coaches also submit the players who they feel are the top prospects from their team and other teams in their conference which helps determine the final roster. Each of the ECHL teams has either a starter, reserve or alternate named for the ECHL All-Star Classic.

Forward Steven Swavely, defenseman Maxim Lamarche, and goaltender Martin Ouellette have been loaned to the Royals from the Lehigh Valley Phantoms of the American Hockey League.

“Five Decades of the Flyers”

Royals Will Donate and Plant One Tree with Berks County Conservancy

for Every 750 Fans in Attendance