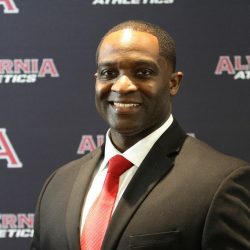 Alvernia University announced Ralph Clark as its inaugural head football coach during a Jan. 5 press conference at its Reading campus. Alvernia Football will officially kick off in fall 2018.

Coach Clark’s first official day will be Jan. 11, after he returns from the American Football Coaches Association Annual Convention in Nashville, Tenn.

Coach Ralph Clark comes to Alvernia from Seton Hill University, with 19 years of experience, including serving as the Defensive Coordinator at the NCAA Division I-FCS, Division II, and Division III levels, as well as a stint as a high school head coach. His coaching stops include Saint Francis (Pa.) Northeastern and Georgetown universities. In addition to his role as Seton Hill’s Defensive Coordinator, Coach Clark also served as the Griffins’ Recruiting Coordinator and brings significant experience recruiting at high schools with high expectations of student athletes academically.

“Building a top NCAA football program from the ground up is a rare opportunity,” said Athletic Director Bill Stiles. “We anticipated there would be interest in the position but had no idea there would be over 300 applications. Our search committee of university administrators, faculty, coaches and students did an amazing job reviewing and culling the pool of applicants down throughout the months of November and December.”

“Coach Clark has expressed a desire to recruit and develop men of character, who will graduate as champions of both the classroom and the athletic field. His experience recruiting in Pa., and the Mid-Atlantic region was a real positive to the committee,” said Stiles. “His energy and enthusiasm made an impact on everyone he met with one campus. We believe he will be a great addition to Alvernia’s athletics staff and a source of great pride for our university.”

President Tom Flynn spoke highly of Clark’s background, and his enthusiasm for the university’s mission to be a “Distinctive Franciscan University” committed to the community.

“In addition to his experience coaching at several excellent universities, Ralph Clark impressed me as an articulate, values-based leader with passion for developing impressive student-athletes and building a football program,” said Flynn. “Coach Clark will be a fine representative of the university both here in Reading and throughout the region.”

As a player, Clark was a member of the first football team at Robert Morris University, where he was four-year letter winner. He was selected as an Unsung Hero All-American following his senior season at Robert Morris and was invited for a free agent tryout with the Pittsburgh Steelers.

Clark started his coaching career as an assistant coach at James Madison High School in Vienna, Virginia. After two years at Vieanna and a year at St. John’s College High School in Washington D.C., he made the jump to college as a linebackers and secondary coach at Georgetown. Clark got his first opportunity as a defensive coordinator at Rose-Hulman Institute of Technology from 2006 to 2008. After his first season at Rose-Hulman Clark was one of 30 coaches in the nation invited to participate in the 2007 Football Coaching Academy. The Academy was hosted by the NCAA and featured sponsorship from the NFL It was convened initially in 2003 to promote leadership development for ethnic minority coaches.

During the on-campus press conference on Thursday, Coach Clark thanked university leaders for trusting him to lead the development of Alvernia’s new football program. “It is an honor to be a part of history, not only having the opportunity to start a program, but to do so at such a fine institution like Alvernia with a strong academic background, and commitment to athletic excellence,” said Clark.

“It’s evident to me that there is a family component that connects everyone at Alvernia,” Clark said. “That is something that you do not find everywhere, and quite frankly was important for me to see because next to my faith, family is the most important thing to me and it is something that I will be stressing to student-athletes as we begin recruiting. They’re not just joining a football program, they’re joining our family.”

Football is the Alvernia’s 25th varsity sport, and will kick off fall 2018.