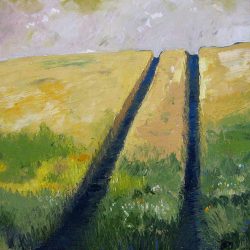 Studio B, 39A East Philadelphia Avenue in Boyertown, PA, is pleased to announce the opening of Agri-CULTURE, the studio’s 9th annual show featuring art inspired by agriculture.

Prizes will be awarded on Friday night, including the coveted “Best In Show,” which nets the winner a cash prize as well as a featured spot during the agriculturally-themed exhibit in 2018.

Juror for Agri-CULTURE is Miles DeCoster,professor at Kutztown University, PA. DeCoster has a studio at the GoggleWorks Center for the Arts in Reading, PA. His work has been included in many exhibitions throughout the United States, as well as Mexico, Italy and Hungary and in the permanent collections of the Art Institute of Chicago, the Museum of Modern Art, the Walker Art Center in Minneapolis and the Rare Books and Special Collections at the Olin Library at Washington University among others. He has received grants from the National Endowment for the Arts, the Illinois Arts Council, Post- Newsweek Stations and the Headlands Center for the Arts in Marin, California. For more go to http://milesdecoster.com.

Susan Biebuyck, Studio B’s gallery director, looks for an angle each year to challenge artists to a fresh take on the traditional subjects of agriculture and farming while saluting the area’s agricultural roots and paying tribute to its natural beauty in creative ways. Each year Biebuyck selects a juror from her network of artists, gallery directors, and directors of area art centers to choose winners for monied prizes.

Studio B opened its doors during Boyertown’s December 2008 Holiday Open House Tour and welcomed hundreds of members of the community to its premiere exhibit. In January 2009, “The Farm” served as the studio’s first juried themed exhibit and has been staged annually as its most popular “signature” exhibit, and continues to “pack the house” at its opening.

Each year artists prepare to meet Biebuck’s creative challenge on the theme. Fine artist and former art teacher Dave Larson was awarded “Best in Show” at the studio’s inaugural exhibit “The Farm” for an oil painting showcasing Oley’s “Sacred Oak.”

In January 2011, Travis Trainer, was awarded “Best in Show” for his captivating painting of crows on a wooden fence entitled “Black Diamond.”

In January 2016, Biebuyck took the term “Cultivate” as the exhibit’s theme and invited Pottstown’s Art Fusion’s director as juror to “cultivate” the collaboration between the studios. Hilary Fraley was awarded Best in Show for her oil painting entitled “Corn.”

In this year’s 2017 exhibit entitled “Agri-CULTURE,” Biebuck hopes artists will somehow respond to “culture,” the root of the word “agriculture” in their work.