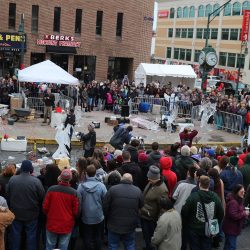 This weekend will mark the third Reading Fire + Ice Fest in downtown Reading. Once again, the Reading Downtown Improvement District has put together a great schedule of concerts, art events and general family fun. If the last two years are any indication, thousands of Berks Countians will head to Penn Street to enjoy at least part of the festival.

The major funding for this event is from the Hawley and Myrtle Quier Fund of Berks County Community Foundation and is a discretionary grant that we make as part of a larger set of grants to encourage activity on Penn Street. In addition to Fire + Ice, we provide funding for the Downtown Alive summer concert series and a wide range of art-related programs through the Penn Street Arts Grant program.

While we truly hope people enjoy the events, the real motive behind our investments is revitalizing the downtown business district in Reading. And there’s a method to our madness.

Over the years, the Community Foundation team has studied dozens of American cities and their successful (or unsuccessful) attempts to rebuild their economies. We’ve visited places as diverse as Los Angeles and Cedar Rapids, Iowa, looking at what works and what doesn’t in positioning cities for their future.

One common thread among cities that have rebuilt a shattered economy is a focus on rebuilding their downtown business districts as regional commercial hubs. While the most spectacularly successful version of that strategy is probably Greenville, South Carolina, it’s also an identifiable strategy in nearby communities, including the oft-touted city of Lancaster. These downtown revitalizations lead to better things all-around, including improved home values and, in many cases, the return of jobs that had fled the cities to go to suburbs.

In most cases, the rebuilding of the downtown started with an aggressive events schedule. The decrepit condition of most downtowns doesn’t typically encourage the kind of capital investment required for bars, restaurants, specialty shops and office relocation. In short, with nobody walking around downtown, it’s hard for an entrepreneur to see the merits of an investment.

Concerts and festivals create a level of foot traffic that, if sustained and built on, entices those first pioneers back into the city. With the recent announcement that Weidenhammer has purchased a building in the 500 block of Penn Street, we may be in the first stages of proving that the concept will work in Reading as well.

There’s actually every reason to believe that it will work. The phenomenal success of West Reading’s revitalization over the past two decades is proof that the local market will support high-end choices.   The architecture and streetscape of Reading is nearly ideal for a 21st century downtown. What is necessary is patience, commitment and attention from the community.

As we enjoy our third Fire + Ice Fest, the Community Foundation will soon begin evaluating the future of our commitment to the downtown strategy. We believe very strongly that the future of Reading will have a huge impact on the future of our region. We’re looking for the City, the local economic development organizations and the local business community to step up and push the downtown revitalization to the next level.

So, enjoy Fire + Ice with your family and know that you’re doing your part to build a new local economy!