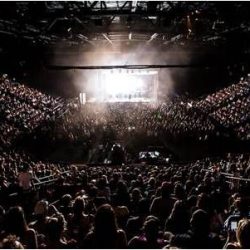 SMG Officials in Reading are excited to announce that the Santander Arena has attained a top 100 ranking in nationwide ticket sales for 2016. This ranking comes from Pollstar, a trade publication for the concert touring industry that collects data from venues and promoters after every event. Pollstar then compiles this information for its “Year-End Venue and Touring Rankings.” The Santander Arena was ranked #98 in Arena ticket sales in the United States.

General Manager, David Farrar about the achievement. “Being ranked again in 2016 was great news to start the year. 2016 saw a lot of great talent come through Reading and it saw a lot of brand new faces through our doors,” he said. “Having top artists like Future, Halestorm, Lindsey Stirling & Marc Anthony come to our building was a huge part of this success, but the hard work of our staff made these events so successful. Our community partners have been great supporters as well, and together we hope to continue to help make Reading a great place for entertainment in 2017 and beyond.”

2017 is poised to be an even bigger year for the Santander Arena as it kicks off the year with a sold out event this Saturday featuring Bill O’Reilly, Dennis Miller and Jesse Watters. In the months following, the arena will host Brantley Gilbert, Miranda Lambert. Newsboys, The Price is Right LIVE!, Eric Church, The Harlem Globetrotters & more to be announced soon.

For all new announcements and updated information on upcoming concerts, please visit www.santander-arena.com, or “like” our Facebook page at https://www.facebook.com/SantanderArenaAndPerformingArtsCenter/.