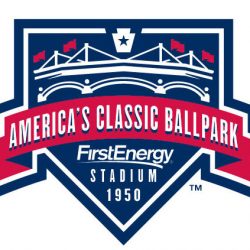 The new look was brought to life at Brandiose in San Diego, where they make teams famous by celebrating their brand stories. Partners Jason and Casey dreamed up top selling logos for the Reading Fightins, Richmond Flying Squirrels, and America’s oldest baseball club, the Cincinnati Reds.

Away from Baseball, America’s Classic Ballpark has hosted memorable concerts by such artists as Chicago, the Beach Boys, Tiny Tim, and Bob Dylan. Taylor Swift, at the tender age of nine, performed the National Anthem before her hometown Fightin Phils game, before going on to music stardom. Taylor has returned since then to perform two more times at America’s Classic Ballpark.

“This ballpark is a huge part of this community, and a huge part of our long-term success”, said Scott Hunsicker, General Manager of the Reading Fightin Phils. “There is a soul to this ballpark, a soul built on hosting three generations, all sharing great times, in the same great place. This stadium is an important part of the history of Minor League Baseball, an authentic piece of Americana, and we are blessed that fans from near and far make a pilgrimage here to FirstEnergy Stadium each summer to experience it, and to share it with their kids. America’s Classic Ballpark needed a logo befitting of its status, and we are proud to say that it now has one.”

America’s Classic Ballpark merchandise is available for purchase. Fans can visit the team store at FirstEnergy Stadium or go online to fightins.com/shop .