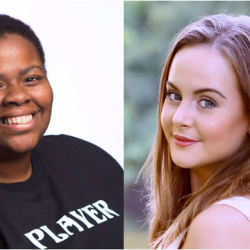 The students were honored at the KCACTF Region II festival, held at Montclair State University in New Jersey, earlier this month. The KCACTF honors excellence in theatrical work of college students and faculty.

As fellowship recipients, both Owens-Fields and Hoover will attend the week-long KCACTF national festival in Washington, D.C., in April.

In addition to the student honors, the Domino Players, Albright’s resident theatre company, was invited to perform its sketch comedy revue Make Democracy Great Again, or, The Most Important Election of Our Lifetime…That Is Until the Next One as part of the regional festival’s Fringe invited productions, a showcase for non-traditional work.

Directed by Albright assistant theatre professor Matt Fotis, Ph.D., Make Democracy Great Again, staged at Albright on the eve of the election, explored the 2016 presidential race in all of its grandeur, glory and absurdity.

At the national festival this spring, Owens-Fields, awarded the fellowship based on her direction of a scene from The Stonewater Rapture by Douglas Wright, will participate in workshops and master classes taught by some of the best directors in the country. She is also eligible for a national fellowship from the Stage Directors & Choreographers Society.

Hoover, who was awarded her fellowship based on a panel interview, will explore various aspects of arts leadership at the national festival. The LORT initiative works to promote diversity in arts leadership positions.

Hoover aspires to work as an artistic director or general manager of a theatre.

Numerous Albright theatrical productions have been showcased at the regional and national KCACTF festivals over the years, with awards bestowed both on the shows as a whole and on individual students and faculty members for contributions on and off stage.

Founded in 1969, the Kennedy Center American College Theater Festival is a national theater program involving 20,000 students from colleges and universities nationwide annually. The organization serves as a catalyst in improving the quality of college theater in the United States. KCACTF has grown into a network of more than 700 academic institutions.