Royals Thwarted by Wheeling on THON Night in Reading, 2-1 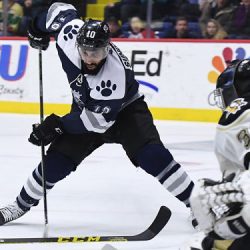 The Reading Royals were defeated by the Wheeling Nailers, 2-1, in Santander Arena on Saturday, January 21.

In the Royals annual effort in conjunction with the Berks County Alumni Association of Penn State University to raise money and awareness for THON — the largest student run philanthropy in the world dedicated to the eradication of childhood cancer — the Royals generated a number of quality chances throughout the game, but simply could not find enough answers to goaltender Doug Carr and the sticky Nailer defenders around him. Wheeling also created a number of good looks, but ended up scoring on two broken plays late in the second period. The Royals finally broke through with less than five minutes left in regulation, but could not find the equalizer despite a couple of crazy scrambles around the Nailer net.

The loss snapped a three-game home winning streak for Reading and pushed the Royals record back to eight games over .500.

After a scoreless first in which both teams had a couple of Grade-A’s that met with stiff resistance from the respective goaltenders, the two teams played extremely close to the vest through most of the second. Later in the middle frame, however, things opened up a bit and Reading had a couple of odd-man rushes that misfired at the last possible moment and fell short.

16:48 into the second, Wheeling charged with numbers into Reading’s end off the rush. Jarrett Burton carried down the left side of the slot, where he attempted to fire a snap shot. But a quick stick-check by a Reading defender caused the puck to slide harmlessly off his stick. Unfortunately, the puck slid to a spot four feet off the top of the crease, where Cody Wydo was floating below the Royals’ defender. Wydo quickly snapped the loose puck up and over Ouellette’s blocker for his twelfth of the season.

With 24.7 left in the first period, Reading defender Jesper Pettersson was called for an interference penalty, giving Wheeling their first power play chance of the night. With time ticking down on the period, Wydo carried through the right circle and cut to the mid-slot. As he was met by a Reading defender, the puck appeared to harmlessly slide off his stick. Unfortunately, however, as Ouellette stepped out to face an anticipated shot from Wydo, the sliding puck hit the skate blade of defenseman Maxim Lamarche and deflected by Ouellette and into the net with just 6.5 seconds left in the period.

The Royals opened the gates in the third and generated several quality chances; but also gave up a few breakaways — two specifically to Wydo — but Ouellette kept the team afloat with several big stops. With 3:59 remaining in regulation, Reading finally broke through when defenseman Florian Iberer sprang Matt Willows into the offensive zone. Willows carried deep into the left circle and then fired a low hot bullet that caught the short-side for his tenth of the year — six of which have been scored in sixteen games with the Royals.

At that point, Reading went in search of the equalizer, but instead was assessed with a late game delay of game penalty that put a damper on the come-back effort. Nonetheless, the Royals still generated a couple of wild scrambles around the net, each of which came up empty to the chagrin of the 6000-plus in attendance at Santander Arena.