Royals Hold On for First Win of the Season over Manchester, 6-3 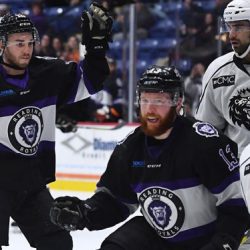 The Reading Royals defeated the Manchester Monarchs, 6-3, in Santander Arena on Sunday.

The Royals jumped out of the gates to build a six goal advantage through forty minutes and then held on for dear life in a third period where the Monarchs fired twenty-three shots and scored three times, as Reading picked up the team’s first win in seven tries against Manchester (1-5-1-0). For the second consecutive night, the Royals chased the opponent’s goaltender, getting six goals from six different players (and at least a point from eleven different skaters) to stretch the team’s winning streak to three and unbeaten streak to four (3-0-0-1). The win pushed Reading’s record to a season-best eleven games over .500 for the first time this year.

Reading broke through on the team’s first power play chance of the evening 11:31 into the game when Jesper Pettersson ripped a rocket from the high slot that goaltender Sam Brittain fought off with the upper body. The rebound fell to Maxim Lamarche who teed one up as well, which Brittain also rejected; but he couldn’t get the third one, as Chris McCarthy fired home his team leading seventeenth of the year.

Fifteen seconds after that, the Royals took a 2-0 lead when Steven Swavely dug a puck out of the left corner and centered it to the low slot where Johnny McInnis stepped up for a one-time snapper that floated up and over the catching hand of Brittain for his fourth in his last three games — and his ninth of the season.

With three minutes left in the period, Robbie Czarnik extended the Royals lead to 3-0 when he made a brilliant play on the left half wall to elude two defenders and free to the puck towards the middle of the ice, where he gained possession and snapped it by Brittain for his fourteenth of the year.

Reading continued the onslaught in the second when Matt Willows got what proved to be his second consecutive game winner for the team when he drilled a hot rivet out of the left circle that slipped through Brittain and served to chase him from the game 5:47 into the period. For Willows it was his twelfth of the season — eight of which have come in twenty games for the Royals. Goaltender Jonah Imoo took over for the Monarchs at that point.

Olivier Labelle, who returned to Reading earlier today from the Syracuse Crunch of the American Hockey League, made it 5-0 on a brilliant deflection of a Nick Luukko snapper from the right point 16:05 into the second. And 1:43 after that, Steven Swavely charged off the rush and ripped a bullet by Imoo on the stick side for his eleventh of the year.

The third period had a decidedly different feel with the Monarchs generating twenty-three shots and capitalizing on three goals, including a snap shot from Rihards Bukharts from the slot 1:29 into the period; a power play deflection by Kevin Morris at 9:21; and a laser out of the left circle two minutes and eight seconds after that by Teddy Doherty. But the hill was too high for the Monarchs come-back effort to climb despite extending the game in what felt like an interminably long final frame that finally ended with the Royals holding a three-goal advantage.

The Royals have announced that forward Olivier Labelle has been returned to the team from the Syracuse Crunch of the American Hockey League.