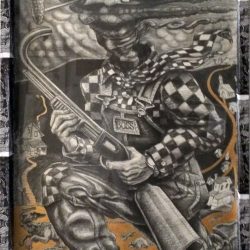 Studio B, 39A East Philadelphia Avenue in Boyertown, PA, awarded $500 in money prizes to artists during the opening of the studio’s 9th annual show entitled “Agri-CULTURE” featuring art inspired by agriculture. Miles DeCoster,professor at Kutztown University, PA, served as juror for the exhibit.

In January 2016, Biebuyck took the term “Cultivate” as the exhibit’s theme and invited Pottstown’s Art Fusion’s director as juror to “cultivate” the collaboration between the studios. Hilary Fraley was awarded Best in Show for her oil painting entitled “Corn.”