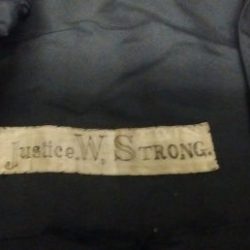 Election-related disagreement is certainly not a new phenomenon.  In fact one of the nation’s most bitter disagreements occurred during and after the contentious election season of 1876, a contest which pitted Democrat Samuel Tilden against Republican Rutherford B. Hayes. While Tilden won a majority of the election’s popular vote, irregularities and disagreements in multiple states left neither candidate with a clear majority of electoral votes. To settle the matter, congress passed a special bill to establish an Electoral Commission that would review disputed vote counts in several states and award 20 disputed electoral votes as they saw fit.  The 15-member commission was comprised of five senators, five representatives and five members of the Supreme Court.  Among the members was Supreme Court Justice William Strong (1808-1895) of Reading, Pennsylvania, serving in what was likely the most significant role of his distinguished career as a lawyer, U.S. Representative and Supreme Court Justice. The commission was comprised of 8 Republicans and 7 Democrats, and it might come as little surprise that for every state reviewed, the Republican candidate Hayes won by an 8-7 vote.  When the commission’s task was complete, they determined that Hayes had rightfully won the election with 185 electoral votes to Tilden’s 184 votes.  The Commission’s decision was not fully embraced, and in March 3, just two days prior to the inauguration, the House of Representatives passed a resolution declaring their opinion that Tilden was the rightful President of the United States. This was the era of Reconstruction and federal troops were still occupying states which had aligned with the Confederacy. A consequence of Hayes’ victory was an informal deal which entailed the Republicans withdrawing these troops from the south, effectively ending  Reconstruction.  Unfortunately, this opened the door for the creation of Jim Crow Laws and the disenfranchisement of many African American voters. During our inventory of the Berks History Center textile collection, we discovered the judicial robe of Election-Commission member William Strong.  Strong was born in Sommers, Connecticut, he studied at Yale Law School and in his later years he resided in Washington D.C.  However, he was considered one of Reading’s native sons, having practiced law here from 1832 to 1857, and serving the region in the U.S. House of Representatives from 1847 to 1851.  It is one of several items in our collection that belonged to Justice Strong. As we continue to inventory our museum collections, we are reminded that not all of our history is easy or enjoyable to remember. Some items, like Justice Stong’s judicial robe, tells us part of our American story, from our unique Berks County perspective, of a divided and uncertain sociopolitical climate. Regardless of an artifact’s political context or sometimes controversial subject matter, Berks History Center remains committed to its 148 year tradition of collecting and preserving our shared local history.