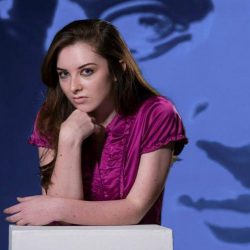 For the third time in as many years, an Albright College student/alumna has received a prestigious Fulbright award.

Rachel Roseman, a 2016 graduate with a bachelor’s degree in English and theatre, has been selected for the highly competitive Fulbright U.S. Student Award to Belgium. The Ashland, Pa., resident will teach a course in American civilization and culture to graduate students at the University of Mons in the French-speaking region of the country. Roseman will also serve as a cultural ambassador, helping to enhance mutual understanding between Americans and Belgians.

“I am incredibly humbled to receive this award,” said Roseman.

The Fulbright program is America’s flagship international educational exchange program. Recipients of Fulbright awards are selected on the basis of academic and professional achievement, as well as a record of service and demonstrated leadership in their respective fields.

Roseman said the selection of the previous Albright students inspired her to apply. “And the faculty at Albright is exceptionally distinguished, many having been grant recipients themselves. So when they encouraged me to apply I took their advice seriously,” she said.

Like the previous Fulbright recipients, Roseman spent a portion of her Albright career studying overseas. She traveled to Paris on a faculty-led study abroad trip in 2015, and returned to the city for her final semester to study at the Sorbonne.

“Coming from such a rural community, studying abroad, and most certainly working abroad, don’t seem feasible for a student of limited means,” said Roseman. “But with scholarships and the support of Albright’s Experiential Learning and Career Development Center and faculty, I didn’t let my own insecurities get in the way of applying for these opportunities.”

Arcana Albright, Ph.D., associate professor of French, believes Roseman will make an exceptional cultural ambassador. Albright led the 2015 study abroad trip to Paris, and said Roseman “consistently demonstrated an appreciation of her foreign language studies, an openness to cultural difference, and a commitment to thinking deeply about the cultural phenomena she was experiencing and witnessing, from the Louvre Museum to the Shoah Memorial to the Grand Mosque of Paris.”

A standout student at Albright, Roseman was a member of the Domino Players, the College’s resident theatre company, and performed in several productions, including Maelstrom, for which she was nominated for an Irene Ryan Acting Scholarship from the Kennedy Center American College Theater Festival. Roseman also conducted an Albright Creative Research Experience project on theatre of the absurd in contemporary young adult fiction.

Since graduating from Albright last May, Roseman has worked in her hometown as a home health aide for senior citizens and as a youth mentor.

Roseman will depart for Belgium this month and serve until June. She initially applied for a 2017-18 year-long Fulbright award to Luxembourg, but when an opening came up in Belgium, Roseman was selected to step in and complete the term.

She joins more than 100,000 Fulbright U.S. Student Program alumni who have undertaken grants since the program began in 1948.

After completing her Fulbright, Roseman hopes to remain in Europe. She is applying to the International Law and Diplomacy master’s program at the American University in Paris, which includes a seminar at The Hague and a human rights certificate program at Oxford University. Ultimately, she is eying law school to specialize in international law.