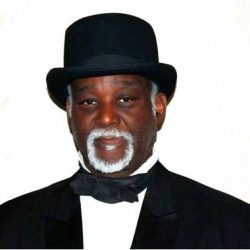 Music of The Underground Railroad by Joe Becton

The deep woods around what is now Hopewell Furnace National Historic Site harbored many fugitive slaves. Immerse in the sounds of the era with phenomenally talented historian, Joe Becton; who will masterfully weave stories about the Underground Railroad with a special emphasis on the music of the period.  Mr. Becton, a retired Park Ranger, continues to passionately relate history to delighted audiences as a tour guide, a musician and lecturer. Free. No reservations required.

This is a one hour Interpretive and interactive program on the music associated with the Underground Railroad and America’s attempt to define Freedom. The presenter will be dressed in period garb and play guitar and harmonica. He will play and sing 19th Century freedom and popular songs, from “Oh Freedom” to “The Colored Soldier”. Group participation is highly encouraged.

Joseph W. Becton was introduced to history by his father, a history and social studies teacher in the Philadelphia school system. Joe earned Associate Degrees in Social Work and Social Science at the Reading Area Community College, and Bachelor of Arts in History Education at the University of West Florida. In 1997 he studied slavery at Yale University with David Brion Davis. He has been a Marine, Park Ranger, Supervisory Park Ranger, counselor, teacher and Director of Visitor Services. Joe retired from the National Park Service in 2009 and created his own company Becton Tours and Historical Services. He presently, holds membership in the Association for the Study of African-American History and Life, National Association of Black Story Tellers and in the Pennsylvania Historical Society.

Becton did his first Civil War program on the 25th USCT’s at Fort Barrancas, Pensacola Florida in 1983. In 1989 he became the Director of Visitor Services at Fort Mifflin, Philadelphia Pennsylvania and developed Revolutionary and Civil War programming and special events.

He is a co-founder of the 3rd Regiment United States Colored Troops Civil War reenactors started in 1990.

During 1995-96, he taught a course on Africans and Civil War in Philadelphia at the public library and hosted a segment of the Veteran’s Hour on W.D.A.S. radio A.M. called “Champions of Freedom”.

As a member of the Pennsylvania Humanities Council’s Commonwealth Speakers he delivered: “African Soldiers in the Civil War “; “The Evolution of the Blues” and “Samuel D. Burris :Conductor on the Underground Railroad”.

Joe’s research on Africans and the American Revolution has led to the development of a monument at Valley Forge, to “Patriots of African Descent” in 1991. He is a co-founder of the First Rhode Island Regiment Revolutionary War reenactors. He developed “Oh Freedom”, the state of New Jersey’s portable traveling exhibit on Africans of New Jersey and the Revolution 2008.

He has published several articles: “African Soldiers of the Rhode Island Regiment at the Battle of Fort Mercer October 22, 1777″ Gloucester County Historical Society,  New Jersey, June and September 1994: “The Black Regiment and the Defense of Philadelphia1777-1778” and “An account of the Auction Cars” 1997, Windsor Fry, African American National Biography Oxford 2008.

In 2008 Becton appeared in the Warren Bass Documentary film “Black Soldiers in Blue” and began his” Music of the Civil War Era “program. In 2009- 2014 the 3rd Regiment USCT’s planned organized and delivered the USCT’s Weekend at Fort Mifflin each April with reenactors and actors attending from around the Eastern United States. Joe was part of the planning and organizing committee for these events.

In 2010 and 2015, Becton served as Grand Marshal for the Civil War Grand Review Parade and Festival, in Harrisburg Pennsylvania. In 2013, Joe was part of the planning and organizing committee for the 150th Commemoration of Camp William Penn. In 2016 Joe appeared on Bill O’ Reilly’s Fox News Show, “Forgotten Patriots”. He also completed the requirements to be certified a Master Tour Guide by the Association of Philadelphia Tour Guides, December 2016