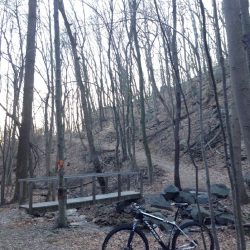 When: Feb. 10-14th. The best chance to come see work being done and conduct interviews will be Saturday, around 11 am. More specific times can be coordinated with BAMBA member John Pacharis, at 484-332-0316.

Where: Klapperthal Trail, Neversink Mountain Preserve. The trail can be accessed at the end of Klapperthal Road, at Forest Hills Cemetery in Exeter Township. Note: the trail parking lot will be closed to traffic, but John Pacharis can shuttle you over from W. Neversink Road via his truck.

(February 2017) – A trio of bridges on Neversink Mountain Preserve Klapperthal Hollow Trail will be replaced with new, wider bridges, accessible to hand cyclists and wheelchairs, through a project spearheaded by Berks Area Mountain Biking Association. Volunteers from BAMBA will be on the mountain through Monday, replacing and widening the existing bridges to a width of 5-feet, from their current 32-inches, and building ramps for each.

The project has been in the works for more than two years, after being initiated by BAMBA member John Pacharis, a longtime mountain biker who took up hand-cycling following a dirt bike accident nearly 5-years-ago. “When you’re a mountain biker, it’s not just a hobby- it becomes your lifestyle,” Pacharis said. “Right after my accident, I went into a bad depression because I’d been so active. I was pretty much housebound and couchbound for probably a good year and a half.” Following multiple knee surgeries and the physical therapy that followed, Pacharis- in the midst of his depression- found solace with BAMBA. Later, he’d get his first hand cycle after becoming involved with Corps Fitness in Wyomissing. “I was able to get back out and ride with my family again,” Pacharis said of being introduced to the sport. “I started riding Mount Penn, because Mount Penn is very accessible. The older trails are pretty wide. And then I was like, ‘I’d really like to ride Neversink.’”

As a mountain biker, Pacharis often rode Neversink Mountain, and knew it was a good ride for hand cyclists- minus one part: “I knew the bridges were too narrow for hand cycles,” he said. “They’re actually too narrow for a lot of bicycles now. The trails are plenty wide to ride. You do like a 6-mile loop on a hand cycle- except for the bridges. That was the pinch point for people having access.”

BAMBA’s bridge improvement project will require the closure of Klapperthal Trail through February 14th on Neversink Mountain Preserve, which is managed by Berks Nature. The project has been aided by a $6,700 grant to BAMBA from Greater Reading Young Professionals, in addition to support from other area businesses, including Green Mountain Timber Frames and Lyons & Hohl.

“This has been an outstanding issue for hand cyclists, and just families in general that go hiking on Neversink,” BAMBA Secretary Mitch Raczy said. “Our goal is to make people say, ‘Neversink Mountain- that’s a great place. I go there all the time.’” Raczy added: “We’re so lucky to have that natural resource in our backyard. And it’s beautiful- the bike trails, the hiking trails, the views. Some of those trails on the backside, you’d have to pay in other places to ride a trail like that.”

The goal of the bridge project, Pacharis stressed, “is to give access for everybody on Neversink Mountain.” While Pacharis himself is fortunate enough to be able to walk and get off his bike if needed, some of the other adapted athletes he rides with don’t have that luxury. “They can’t walk. They’re paralyzed,” he said. “This isn’t just for me- it’s not just for other hand cyclists- it’s for everyone. People with strollers, even recumbent bicycles and tricycles, who will be able to get over these bridges now. It’s going to open up that area so much more for people to take advantage of.” Pacharis will mark the 5-year-anniverary of his accident next month. He credits cycling with helping him through the dark days that followed. “Now I ride the trails 2-3 times a week- it keeps me sane,” he said. “If people can access these trails, maybe they can get through their own depression.”