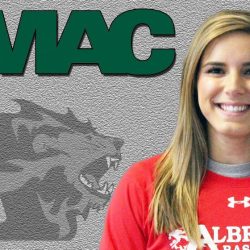 Mazzarelli led Albright to a 2-0 week in conference play to remain undefeated and on top of the standings with a game to play. Mazzarelli averaged 27 points, 4.5 rebounds, and two assists while shooting 54 percent from the field and making 9-of-18 shot from three-point range. In a 72-49 win over Alvernia, Mazzarelli scored a career-high 31 points with seven rebounds, three assists and three steals. She followed that with 23 points on 9-of-12 shooting, including 5-of-6 from beyond the arc in an 80-68 win over Lycoming.

Albright finishes the regular season with a home game against Messiah on Saturday, Feb. 18 at 2 p.m.