With Flu Activity High, Department of Health Reminds PA, It’s Not Too Late To Get Flu Shot 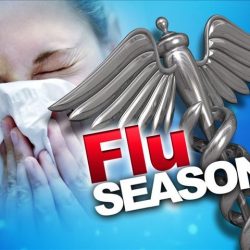 Harrisburg, PA – The Department of Health is reminding everyone in Pennsylvania that there is still time to get immunized against the flu as the number of illnesses from the virus remain extremely high across the commonwealth.

“As long as the flu virus is circulating in a community, it’s not too late to get vaccinated,” said Secretary of Health Dr. Karen Murphy. “The flu shot is still the best way to make sure you and your loved ones are protected. Now that we are in peak flu season, make sure you’re taking steps to prevent getting sick with the virus. In addition to getting vaccinated, everyone should also practice common sense prevention methods like washing your hands often and staying home from school or work when you’re sick with the flu.”

The Centers for Disease Control and Prevention, or CDC, recently announced that the 2016-2017 seasonal flu has reached epidemic levels, with widespread activity reported in 43 states across the country. Pennsylvania has reported widespread flu activity for the past eight consecutive weeks and anticipates that status to remain as such for the next several weeks. 33,271 influenza cases and 51 flu-related fatalities have been reported to the Department of Health so far this season.

Anyone who has not yet received his or her flu shot should do so as soon as possible, as it takes two weeks for the body to build the resistance given by the vaccine.

The CDC recommends a yearly flu vaccine for everyone 6 months of age and older as the first and most important step in protecting against this serious disease. It is even more important for those at higher risk of getting the flu to get their flu shot. High-risk groups include:

Children and infants;Pregnant women;Seniors;People with disabilities; andPeople with health conditions.

In addition to getting your flu shot, you should wash your hands often, avoid sneezing into your hands, limit touching your own face, clean doorknobs and handles, and stay home from school or work when you have the flu.