Riding the Rails of History: How the Railroad Industry Sparked Government Intervention 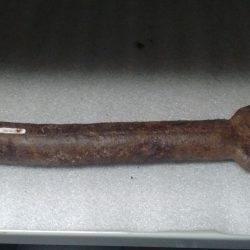 The artifacts we collect at the Berks History Center have the power to tell compelling stories, especially when they relate to issues that are still relevant today. This is certainly the case with a simple iron pin which we recently found during our collections inventory.

In the 19th century, railroad “brakemen” coupled cars using pins like this one in conjunction with large iron links. Because coupling required a brakeman to work between moving cars, it was extremely dangerous work. By 1890, the average brakeman had an 11% chance of being injured – with nearly half of their injuries occurring during coupling.

Inventors were aware of the problems posed by the link-and-pin system, and they sought to develop safer coupling methods.  One of these inventors was a dentist from Bernville, Berks County, William H. Scholl, who designed a new coupling system in 1868.  We do not know what prompted a Berks County dentist to design couplers, and there is no evidence of him seeking a patent for his creation, but his design survives in the form of a model, also located in the collections of the Berks History Center.

Railroads were hesitant to jettison their links and pins, even after the advent of a commercially viable and safe alternative, known as the knuckle coupler, in 1873.  Outfitting an entire fleet of equipment would be expensive, and they feared that upgrading would render them unable to interchange their cars with railroads that still used the older coupling method.

While railroad executives grappled with this quandary, their industry was becoming increasingly dangerous. In a four-year span between 1887 and 1890, North American railroads broke annual records for employee fatalities on three occasions, reaching a staggering 806 deaths for the year of 1890.

While the United States Government had been largely indifferent to the affairs of corporations, this railroading safety crisis caught its attention and led to intervention. In 1893 Congress passed the Railroad Safety Appliance Act which mandated a variety of safety upgrades, including a provision specifying that any railroad engaged in interstate commerce must adopt “automatic couplers that can be uncoupled without a man going between” prior to 1900.

This was a radical and unprecedented move for a government which had never involved itself with worker safety or corporate regulation.  It opened the door for subsequent regulation including additional railroad safety acts and the Adamson Act which established an eight-hour work day for railroad employees.

Despite some corporate resistance, implementation of the Railroad Safety Appliance Act was a relatively smooth process, and studies showed that employee injuries declined sharply after 1900, despite the fact that railroads were greatly expanding their operations. With the link and pin coupling system obsolete and illegal, most coupling hardware was discarded and lost to time.

The “P&R” marking on our coupling pin is the abbreviation for the Philadelphia & Reading Railway – the corporate predecessor to the more commonly known Reading Railroad.  It was discovered by a resident of Leesport who generously donated it to the History Center in 2014.  We also discovered a coupling link in our collection, though its railroad of origin is undocumented. These artifacts are unique survivors that remind us of an era when industrial jobs were extremely dangerous and the United States Government took unprecedented measures to address the problem.