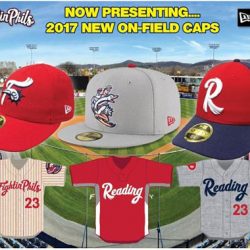 The Reading Fightin Phils have announced three new caps their players and coaches will wear for the 2017 season. The hats represent the history of America’s Classic Ballpark.

The first hat is a red cap featuring the F-Fist logo with a white button. The hat will pay homage to the 1950’s Philadelphia Phillies Whiz Kids. The hat will be worn during home games with their pinstripe jersey. The hat is made from polyester wool and is low profile 59/50 from New Era.

In addition, the Fightins will wear a new road hat during the 2017 season. A white feathered R logo is featured on the front representing the city of Reading. The front panel of the hat will be red while the remaining panels of the hat are blue. The low profile New Era 59/50 hat will be worn with the Fightin Phils grey road uniform.

Fans can purchase the hats by going online to fightins.com/shop or by visiting the team store at FirstEnergy Stadium.