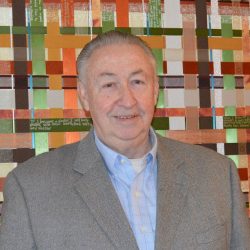 Given his varied career, Sheeler’s work as a senior fellow will be varied as well. For the past several weeks, he has been gathering information and pursuing special projects that support the mission of the Community Foundation.

He is working most closely at the moment with VOiCEup Berks, an organization dedicated to connecting Berks County residents to volunteer opportunities through a service learning model. Service learning combines community service with education and reflection to enhance the volunteer experience, nurture civic responsibility, and empower communities.

VOiCEup Berks formed in June 2015 and became a fund of Berks County Community Foundation in March 2016. In July 2016, VOiCEup also became an affiliate of the Youth Volunteer Corps network.

Sheeler graduated in 1970 from Elizabethtown College with a bachelor’s degree in business administration. In his career, he has worked for both for-profit and nonprofit organizations. He worked as an industrial engineer and plant manager for Berkshire International, The Washington Group Inc., and W. D. Zwicky and Son Inc. He also worked as business manager for Bethany Children’s Home and the Hispanic Center (Centro Hispano Daniel Torres) in Reading.

Sheeler is one of three Senior Fellows at the Community Foundation. The others are:

Karen Miller, a former mayor of Reading, a former secretary of the Pennsylvania Department of Community Affairs, and former chief of staff at the state Department of Conservation and Natural Resources. Miller is studying Pennsylvania’s Act 47, a law designed to help financially-distressed municipalities, and what it will mean as cities exit the program. Reading has been in Act 47 for six years and is expected to end its Act 47 status in 2019.Carole B. Snyder, a former managing director of the city of Reading and a former senior vice president at FirstEnergy. Snyder is moderating the Berks County Task Force for Oral Health, which is leading several initiatives to improve access to dental care and increase community awareness of the importance of oral health. Oral health was identified as a community priority in the 2013 Berks County Health Needs Assessment, which was a wide-ranging study sponsored by the Community Foundation, the United Way of Berks County, Penn State Health St. Joseph and Reading Health System.