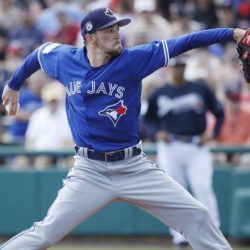 “We are very happy to see Casey reach his dream of playing Major League Baseball,” said Albright head baseball coach Jeff Feiler. “It’s a testament to all the hard work he has put in over the years. He is an outstanding representative of Albright College and our baseball program, and I’m excited to see what he can do for the Blue Jays this season.”

In seven minor league seasons, Lawrence is 63-60 with a 3.83 ERA with 629 strikeouts. His first MLB strikeout came against Tampa Bay’s Evan Longoria, a three-time All-Star and former Rookie of the Year. In his second appearance on Sunday, Lawrence struck out Longoria for a second time.

At Albright, Lawrence was a first-team all-conference performer as a sophomore in 2008, finishing the year with a 4-3 record and a 2.02 ERA. He pitched four complete games, and he struck out 56 hitters while walking just nine. He was on the all-conference second team as a junior in 2009. That year, he finished with a 6-1 record while posting a 2.82 ERA. He finished with five complete games. In 76.2 innings pitched, Lawrence struck out 73 batters while walking just five.

He helped the team to conference tournament appearances in each of those two seasons. Lawrence holds the Albright record with 251 career strikeouts.

Lawrence is the ninth former Albright baseball player to play in a Major League game and the first since Roy Sherid in 1931. Sherid won 23 games in three seasons with the New York Yankees, including a 12-win season in 21 starts in 1930.