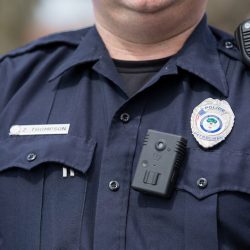 HARRISBURG, Pa. – A bill that would limit public access to video captured on police body cams could soon come up for a vote in the state Senate. Under Senate Bill 560, anyone who wants to see police-recorded video would have to apply to the law-enforcement agency or district attorney for access. A denial can be appealed to the court of common pleas, which the bill says must give deference to the agency that denied the request. According to Elizabeth Randol, legislative director of the ACLU of Pennsylvania, SB 560 removes police body-camera footage from requirements of the state’s Right to Know law, creating a whole new procedure for gaining access.”It puts the burden on the petitioner to justify why this is something that is in the public interest and should be released,” she explained. “Under the Right to Know law, the presumption is that the government agency has to justify why that record should be withheld.”Proponents of the legislation say police body cameras are intended to gather evidence, which is not necessarily subject to public disclosure.But Randol contends the Right to Know law takes law enforcement considerations into account and that the motivation for requiring police to wear body cameras in the first place was to strengthen police accountability.”Moving it out of that realm definitely moves it from conversations around accountability much more squarely into the universe of law enforcement, which was certainly not the original intent of the use of body cameras,” she added. The law also would eliminate the current restriction on recording inside a residence, and the requirement to notify people that they are being recorded.Randol points out that the law also contains no limit on how long footage can be retained, which raises the possibility of creating a compilation of personal information recorded over a long period of time.”So we are very concerned about that way that this might be implemented in ways that could be used for data collection and surveillance.”SB 560 passed the Senate Appropriations Committee last week. Randol believes it could come up for a final vote in the Senate during the week of May 8.