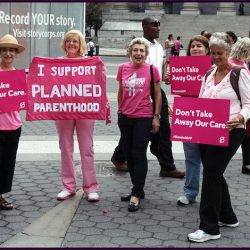 HARRISBURG, Pa. – The state Senate’s Finance Committee last week approved a bill that could effectively defund Planned Parenthood clinics in Pennsylvania. Supporters of Senate Bill 300 say it would only affect the one-third of Planned Parenthood clinics that include abortion services onsite. But Sari Stevens, executive director of Planned Parenthood Pennsylvania Advocates, believes the wording of the bill could lead to a blanket funding ban for all 32 of its clinics across the state, depriving some 90,000 Pennsylvanians of critical family planning services.”The services that would be impacted by this are birth control education and supplies, basic gynecological care, breast-cancer screenings, STD testing and treatment,” she said. The bill now goes to the full Senate for a vote. Gov. Tom Wolf has said he will veto the measure if it reaches his desk.The bill’s sponsors say that by giving hospitals priority, it would direct those who receive publicly-funded services to facilities that provide a fuller range of health care. But according to Stevens, experience proves that isn’t the case.”Texas, Indiana, and Wisconsin have all put into law similar defunding measures, to disastrous effect,” she added. When Planned Parenthood clinics in Texas closed, few of the people they served went to alternative providers, and both unplanned pregnancies and sexually-transmitted diseases increased.Stevens adds the health care system in Pennsylvania is already overburdened, particularly providers that serve low-income communities.”Planned Parenthood operates as that gateway to the health-care system, and also a family planning provider that can see women and men immediately,” she explained. The Guttmacher Institute estimates that in 2014, publicly-funded family planning clinics in Pennsylvania helped prevent almost 53,000 unwanted pregnancies and 19,000 abortions.