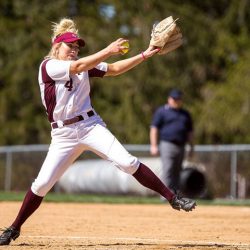 Savannah Nierintz won the final Pennsylvania State Athletic Conference (PSAC) Eastern Division Pitcher of the Week award — her third of the season — the league announced on May 1. It is the senior’s seventh such honor from the conference in the last three years.

Nierintz went 2-1 last week with a 2.14 ERA to help lead Kutztown win its first PSAC East title since 2012. She also recorded her program record-tying third save of the year in the Maroon and Gold’s final game of the regular season.

Facing off against No. 20 West Chester and fellow PSAC East Pitcher of the Year nominee Amanda Houck on Friday, Nierintz allowed just one run over nine innings to record the extra-inning win.

The following day, Nierintz earned yet another complete-game extra-inning win, giving up one run in eight innings in a game one victory over Millersville. She then came on to record the final two outs in the nightcap to earn the record-tying save.

Nierintz ends the regular season 21-5 with a 1.23 ERA, both of which currently rank in the top-six in KU’s single-season history. Her 167 strikeouts, 22 complete games and six shutouts are also all in the top-eight.

Kutztown (30-13) opens play in the 2017 PSAC Tournament in Quakertown, Pa. on Wednesday, May 3 at 3 p.m. against defending tournament champion Bloomsburg.