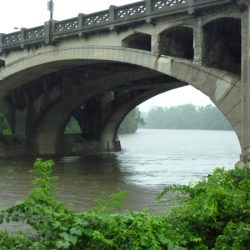 The Pennsylvania Department of Transportation (PennDOT) District 5 has announced long-term restrictions will commence Sunday, May 7, as part of a project to rehabilitate the Penn Street Bridge over the Schuylkill River, Norfolk Southern Railroad, Schuylkill River Trail and Front Street in the City or Reading and West Reading Borough, Berks County.

Beginning Sunday at approximately 10 PM and lasting until the end of the project, the US 422 west ramp to Penn Street will be closed and detoured. The posted detour will utilize the Business 222/Lancaster Avenue exit to Bingaman Street and Fifth Street. Motorists who miss the Lancaster Avenue exit can also use the North Wyomissing Boulevard exit to North Wyomissing Boulevard to Park Road to Penn Avenue/Penn Street.

Also, beginning at 10 PM. Sunday night and lasting until the end of the project, one of the two eastbound lanes will be restricted (heading into the City of Reading) on the Penn Street Bridge.

Motorists are advised to use caution and expect delays traveling through the area.

For the final three-to-six months of the project there will be a single lane both eastbound and westbound on the Penn Street Bridge. Updates will be provided whenever these traffic restrictions are scheduled.

The Penn Street Bridge was originally constructed in 1913. It is 1,337 feet long and 80 feet wide. This section of Penn Street has an average daily traffic volume of 33,796 vehicles.

Motorists are reminded to be alert for slow moving construction vehicles, obey work zone signs, and to slow down when approaching and traveling through work zones, not only for their safety, but for the safety of the road crews.

For more information on projects occurring or being bid this year, those made possible by or accelerated by the state transportation funding plan (Act 89), or those on the department’s Four and Twelve Year Plans, visit www.projects.penndot.gov.

511PA is also available through a smartphone application for iPhone and Android devices, by calling 5-1-1, or by following regional Twitter alerts accessible on the 511PA website.