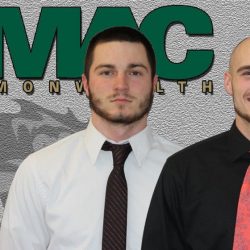 Yordy finished the regular season tied for second in the MAC Commonwealth with six home runs. He was second on the Lions roster with a .306 batting average and a team-high 37 hits. He also led Albright with 21 RBIs. Yordy stole nine bases, and that included a school-record-tying four swipes against Lebanon Valley in the final week of the season. That game was part of a big week for Yordy. He hit .412 with a two-homer game against Susquehanna. He was named Player of the Week by both the MAC Commonwealth and the ECAC South Region.

Yordy led the Lions with 10 multi-hit games, including four three-hit games. He also finished the season by reaching base in nine straight games.

Mastria appeared in 13 games for the Lions with 11 coming out of the bullpen. He finished with a 2-2 record along with two saves to go with a 3.71 ERA. Mastria averaged more than a strikeout per inning, punching out 36 batters in 34 innings of work.

His top two relief appearances came in conference play. In Albright’s victory over No. 11 Alvernia, Mastria pitched three scoreless innings of relief, striking out eight of the 12 batters he faced while allowing no runs on two hits. He earned a save in the 5-1 victory. Against Hood, Mastria again came in for an extended relief appearance. In 3.1 innings, he struck out seven batters while again allowing no runs on just two hits.