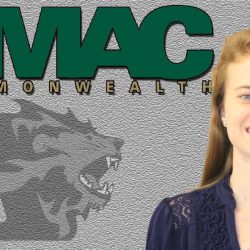 ANNVILLE, Pa. – Albright women’s tennis freshman Mara Trifoi has been named the MAC Commonwealth Player and Rookie of the Year, announced by the conference on May 5. Trifoi was also a First Team selection. Senior Brooke Ronney was named All-MAC Commonwealth Second Team.

Trifoi went a perfect 6-0 in MAC Commonwealth action this season out of the No. 1 position for the Lions. She also did not lose in non-conference dual match action. Trifoi is the first player to be named both MAC Commonwealth Player and Rookie of the Year in the same season since another Albright player, Victoria Foanio, earned those honors in 2011.

Trifoi also excelled in doubles play. She was unbeaten while playing alongside Ronney in doubles play in MAC Commonwealth action. The duo had just one loss on the season, finishing the year with a 10-1 record.

Ronney went 5-2 in conference play to earned Second Team recognition. She posted a 9-3 overall record for the Lions.