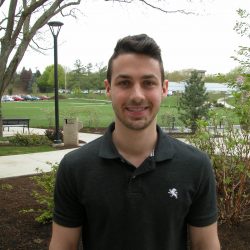 Mikoluk, a 2013 Boyertown, Pennsylvania high school graduate, received a B.S. degree in Biochemistry and Molecular Biology (BMB) on Saturday, May 6.

A native of Poland, he witnessed the very long waiting times a good friend of his mother’s experienced when seeking treatment for thyroid cancer under the old Soviet healthcare. “That made me want to be a doctor. And, my mother, Joanna, always placed a big emphasis on education.”

Mikoluk, also a Penn State Schreyer Honors Scholar, said the second reason he decided to go into medicine was the chemistry courses he took during his first year at Penn State Berks. “I have always been interested in medicine and I felt that switching to the BMB major would better prepare me for a career in medicine.”

He also was impressed by the research opportunities at the college. “It was my favorite undergrad experience,” he said, adding that one of his more significant courses was BMB 402 taught by Assistant Professor of Biochemistry and Molecular Biology Justin DiAngelo. “Also, I had an opportunity to shadow physicians, which encouraged me even more.”

A significant, recent honor for Mikoluk was winning the first place undergraduate poster award at the 58th Annual Drosophila Research Conference held in San Diego between March 29-April 2, 2017, for his Schreyer honors thesis, “The Regulation of Lipid Storage by tra and tra2 in Drosophila,” which relates to his undergrad study of the processing of genes important for lipid metabolism that results in obese animals.

Said Mikoluk, “Due to the many similarities between flies and humans, we hope these findings will be used to further understand human metabolic diseases.” He added that fruit flies and humans are very similar genetically.

DiAngelo, also Mikoluk’s research mentor, said, “Cezary is an excellent researcher. I tasked him with a technically challenging project and he rose to the occasion, functioning very independently, much like a graduate student. He generated high quality and interesting data, which has been recognized by the Drosophila research community with this award.”

The annual conference is sponsored by the Genetic Society of America (GSA) and is the premier meeting for students, postdoctoral fellows, research staff and principal investigators studying Drosophila melanogaster. The GSA’s mission is to deepen understanding of the living world by advancing the field of genetics.

Mikoluk and his parents immigrated to Pennsylvania where members of his father’s family lived when he was 11-years-old. He spent one semester at another Big 10 school, Ohio State, but he said he was a bit overwhelmed by its size and also wanted to be closer to his family. He enrolled at Penn State Berks in the Spring of 2013.

“I had a great experience at Penn State Berks–the faculty, the staff and the students. Classes were a lot smaller and I had a chance to interact much more with my professors. I will miss this place, but it has prepared me well for what I want to be,” Mikoluk said.

His biggest accomplishment thus far is getting into med school. “I don’t know what discipline I’ll pursue, though I am interested in anesthesia. One of the things I like about Hershey (Penn State College of Medicine) is their overseas program, which offers an opportunity to learn about and help provide voluntary basic or specialty medical services in third world countries.”