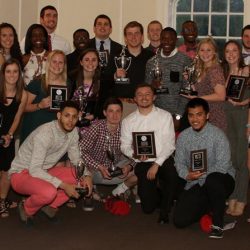 The Albright athletics department held its annual Awards Banquet on Monday, May 8 at Stokesay Castle. Along with honoring the top student-athletes, special awards were handed out to the best and the brightest for the 2016-17 academic and athletic year.

The other award winners are: