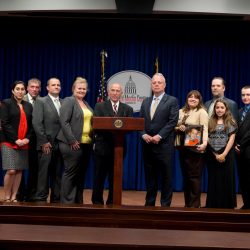 Caltagirone hosted the Spriggs, Kohler and Dunion families, all who have lost loved ones to the cancer, during a news conference following the unanimous passage of his H.R. 44, recognizing National DIPG Awareness Day on May 17.

“My hope is that this resolution encourages all Pennsylvanians to become more informed about DIPG and other pediatric cancers and the challenges we face in finding sufficient resources to fight them,” said Caltagirone, D-Berks.

According to research, DIPG affects children almost exclusively. Approximately 200 to 400 children in the United States are diagnosed with DIPG each year. These children are typically between the ages of 4 and 11. DIPG accounts for roughly 10 to 15 percent of all brain tumors in children.

“The families with us today know all too well the stark realities a DIPG diagnosis brings,” Caltagirone said. “DIPG is almost always fatal, and patients – in these cases children – usually have about nine months to live.

“The scientists, doctors and advocacy groups working to fight this and other forms of cancer – many of whom call Pennsylvania home – deserve our attention and support. Their work is nothing less than the work of miracles for families facing these heartbreaking fights.”

Caltagirone sponsored H.B. 46, which passed in the House in April. The bill would establish a check-off box on Pennsylvania’s state income tax form to allow taxpayers to designate a contribution for childhood cancer research. The donations, deducted from the taxpayers’ refunds, would go to hospitals in Pennsylvania, designated by the state Health secretary, that are conducting such research.

“The Senate could help families like the Spriggs, Kohlers and Dunions by passing House Bill 46,” he said. “We could start the flow of dollars from millions of Pennsylvanians into the fight to find cures for cancers that are taking our loved ones too early. The sooner we act, the more lives we save. It’s really that simple.”