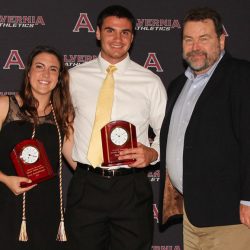 Cameron Coons (Baseball) – A 3-time All-Mid-Atlantic Region selection by the American Baseball Coaches Association and the 2016 MAC Commonwealth Player of the Year. Coons ranks fifth in career doubles (41), 12th in RBIs (122), and 13th in batting average (.388).

Margaret Wentzel (Field Hockey) – A 3-time All-American, Wentzel graduates as the career leader in points (226) and assists (42) at Alvernia, and second in career goals (92). She holds the record for goals in a game (5) and goals in a season (30). Wentzel is a 2-time MAC Commonwealth Field Hockey Offensive Player of the Year and the 2015 ECAC Mid-Atlantic Region Player of the Year.

The Scholar Athlete Award is an annual award given to the male and female senior scholar-athlete. Its purpose is to encourage, recognize, and reward outstanding academic achievement of a 4-year varsity sport letter winner who earned at least 100 credits from Alvernia University.

Erica Dunkelberger (Women’s Soccer) – Completed her athletic eligibility during her fourth year of the 5-year Occupational Therapy Program. An All-MAC Commonwealth honoree and member of the MAC Academic Honor Roll.

The Athletic Director’s Award is presented annually to a male and female student-athlete who embodies the mission of the institution through their actions on and off the field or court of play. It is awarded to those who embrace the core values of Alvernia: service, humility, peacemaking, contemplation, and collegiality, and who are excelled in their sport, in the classroom, and in the community.

J.J. Clinchoc (Track and Field) – The 2017 Indoor Track MAC Scholar Athlete, and runner up at the 2017 MAC Outdoor Decathlon. The career record holder indoors in the 500m, the 4x400m relay, the 4x800m relay, and the heptathlon. The career record holder outdoors in the 4x400m relay and the decathlon. Clinchoc is a member of Delta Epsilon Sigma, Pi Theta Epsilon, is a Resident Assistant, and an active contributor to the St. Francis Day of Service.

Jenna Harper (Women’s Lacrosse) – Harper is a four-year letter winner in women’s lacrosse and will graduate with a Masters in Occupational Therapy. She ranks 14th in her career in games played (65) and has totaled 54 ground balls, six goals, and 23 caused turnovers. She is an extremely active contributor to the success of the institution serving on the Student Athlete Advisory Committee, the Student Government Executive Board, and the Campus Activities Board. She participated in the IGNITE Leadership program, the Intramural Activities Board, was a tour guide and an Orientation Leader.

The Athletics Excellence Award is given annually to up to five senior student-athletes who have excelled in athletics, earning conference, regional, and/or national recognition for their accomplishments.

Marquis Marshall (Men’s Basketball) – Scored 909 career points at Alvernia, and 967 for his career at Towson, East Stroudsburg, and Alvernia. Was a 2-time All-MAC Commonwealth First Team award winner and the 2017 MAC Commonwealth Player of the Year. Was a d3hoops.com Preseason All-American and earned All-ECAC South First Team honors and d3hoops.com First Team All-Region as a senior.

Rebecca Brosious (Field Hockey) – The 2016 MAC Commonwealth Defensive Player of the Year and All-ECAC Mid-Atlantic Region Second Team member. Brosious is fourth in career goals against average (1.83) at Alvernia, sixth in shutouts (4), and sixth in saves (255) with a 35-10 career record. In the 2015 ECAC Championship run, Brosious allowed two goals in 220 minutes and recorded a 4-0 shutout of Stevenson in the ECAC Final.

Heather Wanner (Track & Field) – Wanner qualified for the 60m dash at the 2015 NCAA Indoor Championships and finished 10th breaking her own school record in that race for the sixth time that season. That winter she was named the MAC Indoor Track Athlete of the Year after winning the 60m and 200m races at the MAC Championships.

• Presented to all student-athletes who have met the following criteria:

• 3.3 Cumulative GPA following the fall semester of their senior year of last year of eligibility.

• Transfers who have competed in the last two seasons of their sport(s) at Alvernia and used all of their eligibility.

• Four year Alvernia students must have competed all four years.