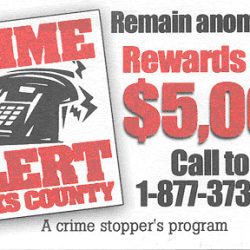 Crime Alert Berks County, the No. 1 crime stoppers organization in Pennsylvania, is again encouraging law enforcement officers to speed as they participate in the third annual ‘Race Against Crime.’Law enforcement professionals will get behind the wheels of high-speed electric racing karts on Thursday, May 18, from 6 to 9 p.m., at Slick Willy’s Karts & Eats at The Works complex at 1109 Bern Road, Wyomissing. Tickets for the Race Against Crime are free, but donations are encouraged to help Crime Alert defray some costs.  Tickets are available at the door.  The Works will have a special menu that evening for spectators interested in dining there. Entertainment will be provided by DJ Image.Chris Nein, Crime Alert vice president and “race director,” is again leading the organization of the event which will include competitions (or heats) among the officers as well as competitions between elementary school students.Chief Jeffrey Biehl of the Wyomissing Police Department has recruited law enforcement officers for that segment of the event.  Biehl said participants include officers from Bern, Heidelberg, and Spring townships, Shillington, Reading, West Reading, and Wyomissing boroughs, as well as from Sinking Spring, the Berks County Prison, and Troop L of the Pennsylvania State Police.   Some members of the Crime Alert board, including Denny Lorah , Scott Light, and Mike McDermott, will also be racing. “The Race for Charity is a great way for Crime Alert and Police officers to give a little something back to the community for all the support we received throughout the year,” Biehl said. He and Nein said there will be seven to eight heats with approximately seven racers in each heat.  Fast times of each heat will go on to a final heat.  The winner of that final race will receive $1,000 to go to the charity of his or her choice.  Biehl said the officers are racing for 15 to 20 different charities.   The winning racer also gets a dinner for six at Chef Tim’s Table in the Crowne Plaza, Wyomissing.“What a great way to have law enforcement members support the charity of their choice,” said Rick Periandi, Crime Alert Berks president. ”I’m sure all the participants are anxious to ‘show off’ their driving skills.”The winners of the George Mack scholarship will be announced.  The two winners will split $2,000.The Race Against Crime falls in the middle of National Police Week.  Throughout the month of May, Crime Alert Berks County is honoring law enforcement officers with its second annual Ribbons of Respect campaign.  Some 25,000 blue ribbons have been distributed and are being displayed throughout the county to honor law enforcement professionals.