Jubilee at Joanna Furnace, A benefit for Habitat for Humanity of Berks 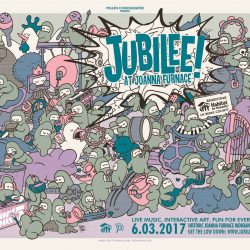 Pollen Consolidated is excited to announce this year’s Jubilee at Joanna Furnace, a family friendly eclectic music and arts festival to benefit Habitat for Humanity of Berks County. Jubilee will feature regional and local musicians on two stages and interactive community art exhibits.

Musical performances will take place on two main stages with no overlapping sets. Interactive community art events will be held throughout the grounds. Interactive art exhibits are as follows:

Virtual Habitat Build Experience, Jason Morris – This will be a completely immersive and interactive Virtual Reality experience walking participants through an actual build that is currently being executed by Habitat for Humanity. Whether you have experimented with VR or not, this spectacle will be a cutting-edge journey into the heart of Habitat’s mission.

Digital Drum Circle, Andrew Chapin – This will be a simple exercise in music production utilizing the Ableton platform. Using digital drum pads Andrew will aid participants in creating their own beats. This will create a unique loop-based piece of music to soundtrack our next project which is stop motion animation.

Stop Motion Animation Station, J.C. Ayala – With community participation, objects will be moved in small increments between individually photographed frames, creating the illusion of movement when the series of frames is played as a continuous sequence. This animation will then be given to Habitat as a video promotion.

Apparel Design, Jeff Stumhofer – Using Acrylic paints, kids and adults will be able to paint their own souvenirs with the help of this accomplished artist.

Sammy’s Steaks and Homage Culinary will be providing several food options for all in the family including vegetarian offerings. A craft beer & wine tent will have a variety of can and draft beers as well as 4 different wines. The ‘Jubilation Station’ presented by Trooper Thorns will offer specialty cocktails.

More information can be found at www.jubileepa.com.

Nestled by itself in a wooded hill, Joanna Furnace is two miles from Morgantown on the Berks, Lancaster, and Chester Counties border. It is easily accessible from the Pennsylvania Turnpike.