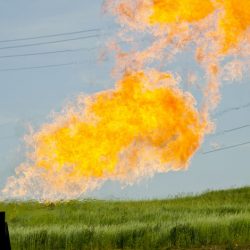 HARRISBURG, Pa. – The U.S. Senate on Wednesday narrowly rejected an attempt to overturn a rule meant to stop the release of billions of cubic feet of natural gas into the environment. Three Republicans joined all 46 Senate Democrats and two independents in rejecting the resolution to throw out the Bureau of Land Management rule. According to environmentalists, nearly 110 billion cubic feet of gas, valued at $330 million, is released each year through leaks, venting and flaring on federal and tribal lands. Dan Grossman, Rocky Mountain regional director of the Environmental Defense Fund, calls the vote a major victory.”The oil and gas industry had lobbied hard to roll back these common-sense protections, and so today is a victory for the environment but it’s also a victory for the American taxpayer,” he says. Methane, the main ingredient of natural gas, is a potent greenhouse gas, 80 times more powerful than carbon dioxide as an agent of climate change.Last month, EPA Administrator, Scott Pruitt, announced that he will reconsider an Obama-era rule meant to curb methane emissions from all new sources. But Grossman points out that the rule for wells on federal lands also applies to existing wells.”That’s the direction that Pennsylvania appears to be headed,” he adds. “It’s the path that Colorado started in 2014, that California continued recently. So I think the momentum toward addressing both new and existing sources is continuing today.”Although Gov. Tom Wolf has promised to impose regulations on existing gas infrastructure, draft rules from Pennsylvania’s Department of Environmental Protection, released earlier this year, only would apply to new facilities.While gas leaks are found throughout natural-gas infrastructure, including pipelines, Grossman says the BLM rules only apply to wellheads and compressor stations.”Fugitive emissions from the wellhead are probably the leading source of methane emissions in the oil and gas sector, so this is a great place to start,” he explains. Wednesday’s vote was the last opportunity for Congress to overturn the methane rule, but the Department of the Interior still could repeal that rule through the rulemaking process.