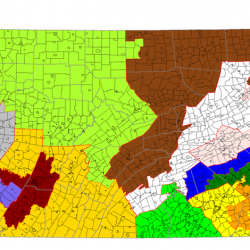 HARRISBURG, Pa. – Redistricting designed to favor a political party has skewed election results in many states, and a new report says Pennsylvania is one of the most extreme examples.The report, “Extreme Maps,” from the Brennan Center for Justice at New York University’s School of Law, said partisan bias in drawing district lines in seven closely divided battleground states has given Republicans at least 16 to 17 additional seats in the current Congress.According to report co-author Michael Li, the Brennan Center’s senior redistricting counsel, Pennsylvania’s map gives some of the most distorted results.”This decade’s maps have been remarkably durable in giving Republicans a 13-5 advantage in the congressional delegation,” he said, “which is just out of whack with the state as a whole.”The report found that partisan bias in district maps in Pennsylvania, Michigan and North Carolina alone have accounted for seven to 10 extra Republican congressional seats in each election since the 2011 redistricting.Li said extreme distortion of political maps takes place when a single political party has control of the redistricting process.”Simply by making sure that you have an inclusive process where lots of people – not only lawmakers from the other side, but also community members – can weigh in,” he said, “you actually see these problems completely disappear.”Bias also was found in states where Democrats controlled redistricting, but those states have relatively fewer congressional districts and, therefore, less of an impact.While courts have found that districts drawn to disadvantage minority groups are unconstitutional, gerrymandering for partisan gain has been allowed. However, Li pointed out there is now a sharp racial divide between the parties.”That really shows you where the court’s jurisprudence is lacking,” he said, “and hopefully in the next year or so, the court will also say that partisan gerrymandering, in addition to racial gerrymandering, is out of bounds.”A political gerrymandering case from Wisconsin may make it to the Supreme Court in the coming term.The report is online at brennancenter.org.