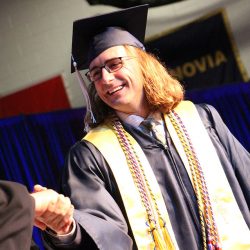 The Indianapolis, Indiana native’s journey began when he enlisted in the U.S. Marine Corps. Stationed in Camp Pendleton, California, he went on to serve a tour of duty in Afghanistan in Operation Enduring Freedom. It was during his time, serving as a liaison between his unit and the engineers who made the aircraft, that Nihiser developed an interest in engineering. So when his tour of duty came to an end, he decided to join a friend studying at Penn State Berks and pursue a degree in Electro-Mechanical Engineering Technology through the G.I. Bill.

“I knew I wanted to major in engineering and Electro-Mechanical Engineering Technology integrates both the electrical and mechanical fields,” explains Nathan.

As part of his major, Nihiser has had an opportunity to conduct undergraduate research, working with Dr. Dale Litwhiler, Associate Professor of Engineering, on renewable energy storage.

His independent research was on a more personal topic. Through his project “Biomechanical Manipulation by means of Muscular Innervation through Epidermal Electrolysis,” He studied individuals who have an abnormal gait–due to a traumatic brain injury for example–and suffer hemi-neglect, meaning they are not aware of half of their body. The goal of the research is to identify when such an individual needs controlled muscular innervation for assistance. Nihiser shared that he was interested in this field of research because his brother suffers from a traumatic brain injury.

With a passion to make a difference, Nihiser’s activities and interests went beyond the classroom. He was the founding president of the Berks Student Veteran Coalition and the Student Veterans of America–Penn State Berks Chapter. In this role, he rallied for and organized the college’s first “Roy G. Biv” fun run, named for the colors of starch thrown at the runners at various checkpoints. The run is now in its fourth year.

“I wanted to show that we can do big things on this campus,” comments Nihiser. “Berks is a veteran-friendly campus. We’re continuing to build a network as the campus grows.”

Nihiser also set out to accomplish a personal goal during each summer. During the summer of 2014, he made a solo trip to South America. As fate would have it, he ran into a friend who was working with One World Futbol, now called the One World Play Project. Nihiser developed an interest in the organization and traveled with them from Peru to Brazil for the 2014 FIFA World Cup.

Along the way, he joined the organization in their mission to share the joy and power of soccer by visiting organizations, schools, and orphanages, and donating One World futbols for the children with which they work. Nihiser plans to join One World Play for The American Dream campaign, where they will travel to Moscow for the 2018 World Cup Russia, promoting the power of play along the way.

During the summer of 2016, he was one of 20 students selected nationwide to travel to China for two weeks as part of Huawei Seeds for the Future Program. Designed to bridge the gap between information and communications technology instruction at universities and the practical knowledge and skills needed in the workplace, the program combines hands-on training and the opportunity to learn from veterans in the field. Students gain first-hand knowledge and technical training at Huawei’s global headquarters and receive an introduction to Chinese language and culture, preparing them for careers in an increasingly interconnected global marketplace.

Nihiser’s future plans include studying for his Fundamentals of Engineering exam, and then submitting an application for the master’s degree program in Systems Engineering at Stanford University.

“The Electro-Mechanical Engineering Technology degree has groomed us for this type of engineering,” he explains.

With commencement behind him, his journey will continue as his travels with One World Play Project and beyond.