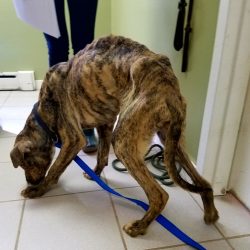 Reading, PA—On April 8, 2017, just four days after Miracle Maisy was found rushed to the Humane Society of Berks County after having been doused in fuel and tossed in the garbage, a hiker found Marshall wandering alone through the thick underbrush of Blue Marsh Lake. The 1-year-old American Pit Bull Terrier was in horrific condition and showed extreme emaciation upon his arrival at the HSBC.

“Humane Pennsylvania’s staff veterinarian said a dog his size should ideally weigh 63 pounds,” says Leann Quire, Director of Shelter Operations. “He was 30 pounds at intake – that’s more than 30 pounds underweight.” In addition, Marshall was dehydrated and covered from head to toe in ticks. He had a condition called entropion, meaning his eyelids rolled inward, which caused him extreme discomfort and can lead to blindness. Marshall also suffered from an infestation of intestinal parasites.

Marshall was put on a strict health recovery plan by the veterinarians at Humane Veterinary Hospitals Reading. The HSBC staff provided Marshall with everything they could to ensure his best chance at a full recovery, including baths, fluids, numerous medications, diet plans, and endless affection.

While the HSBC staff does not know what circumstances led to Marshall’s deplorable condition, they do know that he appreciates the medical attention and TLC he has received from staff and volunteers since his arrival. Even in his worst condition, Marshall’s incredible spirit and personality gave the staff hope.

“Despite the lack of care Marshall received prior to coming in, he has not let that interfere with his love for people,” Leann gushes. “His favorite activities include giving kisses, playing with tennis balls, and receiving any type of human interaction he can get.”

On May 5, 2017, Marshall was deemed healthy enough to be neutered and to receive his entropion reparative surgery. As of May 17, Marshall weighs 57.8 pounds – almost 28 pounds more than his intake weight on April 8.

Leann states, “This dog is one-of-a-kind and has overcome many challenges, and now he deserves a fantastic life. Marshall is a perfect example of how amazing our kennel staff and vet care is and what it can mean for the life of an animal in need.”

Now, Marshall is ready to find his forever home! Applications are currently being accepted and reviewed. His adoption is unique and will not be on a “first come, first serve” basis. Interviews will be conducted until a potential adopter is chosen.

Applications can be submitted to Leann Quire, Director of Shelter Operations, at [email protected]. Adoption applications can be found on the Humane Pennsylvania website at www.humanepa.org, or picked up at the front desk of the HSBC. Please, no phone calls concerning the status of an application.

Marshall would not have made a full recovery if not for the expenses covered by Miracle Maisy’s Medical Fund. This fund supports all life-saving services and emergency medical care for abandoned, abused and neglected animals in need.

To help animals like Marshall in the future, please donate to Miracle Maisy’s Medical Fund at humanepa.org/donations/online-donations.