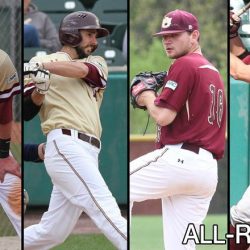 A first baseman, Coons collects his second post-season award of the year, being named First Team All-MAC Commonwealth. Coons completed his final campaign leading the Crusaders in RBI (50) and slugging percentage (.639). He ranked second on the team in doubles (11), triples (4), and homeruns (5), and was third in batting average (.383) and hits (51). Coons currently sits ranked 25th nationally in RBI per game, and 30th overall in total RBI.

An outfielder, Dubas was also named First Team All-MAC Commonwealth. Starting in 45 contests this season, Dubas gathered a .331 batting average on 48 hits with a team-high 8 homeruns. Collecting a team-best 29 walks, Dubas added 10 doubles and 3 triples to his name. His biggest hit of the year came in the opening game of the MAC Championships, where he roped a grand-slam down the right field line in the seventh to overcome a 4-3 deficit and advance the Crusaders to the winner bracket final.

A starting pitcher for the Crusaders, Catchmark notches his third post-season honor, being named the MAC Commonwealth Pitcher of the Year while receiving First Team All-MAC accolades. Boasting an 8-2 record with a 2.28 ERA, Catchmark threw 71 innings with a trio of complete games. Allowing just 18 earned runs, Catchmark picked up a nationally-ranked 91 Ks on the season with three double-digit strikeout performances, all in conference play.

Sides joins Catchmark in receiving his third post-season award, being selected the MAC Commonwealth Player of the Year and First Team All-MAC. Starting at shortstop in all but one game for the Crusaders, Sides hit an impressive team-high . 439 on the season. He led the Crusaders in hits (83), runs (53), doubles (13), and triples (6). Sides is currently ranked in the top-25 in five offensive categories, including ranking first across all Division III athletes in hits.

Alvernia completed the 2017 season with an overall record of 30-15-2, making post-season appearances in both the MAC Commonwealth tournament and the NCAA Regional tournament.