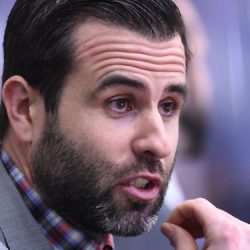 The Reading Royals of the ECHL, affiliate of the Philadelphia Flyers of the National Hockey League, have announced that Kirk MacDonald has been hired as the team’s head coach and director of hockey operations.

Royals’ owner Jack Gulati stated, “We’re proud to formally bring Kirk on board as the Royals’ next head coach. He’s been an important part of our team for several years, and he stepped up under challenging circumstances last season to lead our group. We’re confident that Kirk will do an exceptional job as the leader of our hockey operations department, and we’re excited by the prospects of the next era of Royals hockey with Kirk at the helm.”

“I’ve sincerely been impressed with Kirk’s performance as the leader of our hockey operations department since he took the reins of the team as the interim head coach in April,” said Interim General Manager Ray Melcher. “I’m confident that our club is in good hands, and I look forward to working with Kirk as we continue our efforts to seek championship caliber performance in all phases of the Royals’ organization.”

“I want to thank Jack and Ray for having the confidence in me to provide me with this opportunity to lead the Royals,” said MacDonald. “I look forward to continuing the history of exceptional success that our hockey operations department has had here in Reading. I’m excited by the prospect of building and leading a team that is committed to bringing the Kelly Cup championship back to Reading.”

MacDonald, who is the seventh coach in the sixteen year team history of the Royals, was hired as Reading’s interim head coach on April 3, 2017. He took the head coaching reins sixty-nine games into the 2016-17 regular season with the Royals record sitting at 38-25-4-2=82, which placed the team in fourth place of the North Division. The Royals had clinched one of the four available North Division playoff spots in the team’s sixty-ninth game on April 2, 2017, a 5-3 victory over the Wheeling Nailers. With MacDonald as head coach, the Royals won the team’s final three regular season games and claimed the second seed in the North Division playoff bracket.

In the North Division Semifinal best-of-seven first round playoff matchup against the Brampton Beast under MacDonald’s leadership, the Royals were eliminated four-games-to-two, however two of those losses came in overtime—one of which (Game Five) proved to be the second longest game in Royals’ team history going 95:44 before the Beast bagged the double-overtime game winner. Five of the six games in first round series were decided by one goal—four ending in 2-1 scores; and the one game that was a two-goal decision was the 3-1 decisive Game Six win for the Beast in which Brampton tacked on a late empty-netter to build the two-goal differential.

MacDonald joined the Royals as an assistant under Coach Larry Courville in July of 2014. During MacDonald’s tenure as the team’s assistant coach, the Royals compiled a record of 119-72-14-8 in 213 regular season games (.610 win percentage). The team qualified for playoffs in all three seasons (including 2016-17) during which MacDonald served as an assistant. This past season, MacDonald also served as the sole bench coach for the Royals in a 5-1 win over the Adirondack Thunder on January 27, 2017, when Coach Courville was serving a one-game suspension.

Prior to joining the Royals as an assistant coach, MacDonald served for one season (2013-14) as an assistant at his collegiate alma mater, Rensselaer Polytechnic Institute (R.P.I.) in Troy, New York, where he returned after completion of his pro playing career, which concluded after he and his Reading teammates captured the 2013 ECHL Kelly Cup Championship.

As a player at R.P.I, MacDonald registered 103 points (47g-56a) and 144 penalty minutes in 137 total collegiate games. MacDonald led the Engineers in goals (16) and points (36) during his junior season (2004-05). Prior to the start of the next season, however, MacDonald was diagnosed with and treated for testicular cancer, which caused him to miss the entire 2005-06 season. Upon returning to the team for his senior season, he served as R.P.I.’s captain and proceeded to lead the Engineers in scoring (12g-15a=27pts) in thirty-three games. At the conclusion of his collegiate career, MacDonald received a number of accolades including R.P.I.’s Most Inspirational Player Award and the Rensselaer Alumni Association Community Service Award, and was nominated and selected as a finalist for the Hockey Humanitarian Award, which is bestowed on college hockey’s most notable citizen.

During his six year pro playing career, MacDonald played 406 regular season games (96g-121a=217pts, 358 pims), 272 of which were played in the American Hockey League with Albany, Houston, Iowa and Providence (45g-61a=106pts, 210 penalty minutes). 237 of his AHL games were played with the Providence Bruins, with whom he served as an alternate captain and earned an NHL contract (Boston) in February of 2011. MacDonald also played portions of three different seasons in the ECHL with the Florida Everblades and Royals, compiling 111 points (51g-60a) and 148 penalty minutes in 134 ECHL games.

MacDonald played in two separate seasons with the Royals—2008-09 and 2012-13. In forty-four regular season games in 2008-09, he tied for the team lead with twenty-one goals and was selected as the team’s Most Valuable Player. He returned to the club in 2012-13, when he served as an alternate captain and played forty-seven regular season games, registering thirty-eight points (16g-22a) and fifty-seven penalty minutes. That season, he also appeared in all twenty-two of the team’s playoff games, logging twelve points (4g-8a) and thirty penalty minutes during the Royals run to the Cup. On the ride to the finals, MacDonald scored one of the most memorable goals in team history—a short-handed game winner—in Game Five of the Eastern Conference Finals against the Cincinnati Cyclones that served to clinch the third round series and propel the Royals to the Finals against the Stockton Thunder.