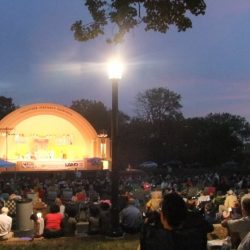 Nationally- and internationally-renowned musicians to play Reading’s City Park Reading, PA—Berks Arts Council is pleased to announce the lineup for the 27th annual Bandshell Concert Series scheduled for Friday evenings July 7, 14, 21, and 28. All concerts are held at the Volunteer Firemen’s Memorial Bandshell in Reading’s City Park. The 2017 series brings a diverse lineup of national and international artists to Reading to present unique musical styles to enjoy and explore music from around the world.“We are very excited with this summer’s Bandshell Concert Series,” said Berks Arts Council Executive Director Karen Haver. “The concerts show off some terrific music in the heart of our city! The artists are extremely diverse, and the series has an international flair that I think Reading will love.”The series explores a different genre each week and includes a special performance from the U.S. tour of Gabriel Alegría’s Afro-Peruvian Sextet sponsored in part through tour support from the Peruvian Ministry of Culture. These free concerts are made possible through the generosity of our sponsors and members. All concerts begin at 7 p.m. with preshow entertainment provided by local arts organizations starting at 6:15 p.m. Refreshments from food trucks and local restaurants are available for purchase.The Bandshell Concert Series opens on July 7 with the music of singer/songwriter/guitarist Murali Coryell. Last fall, Coryell released his ninth album Mr. Senator, which is described by Guitar Player Magazine as “delightfully bluesy Rock and Soul.” But Coryell is an artist that defies category, and the album also demonstrates his versatility, with Funk, Pop, Jazz, Gospel, and Country influences all making an appearance. The son of jazz guitar legend Larry Coryell, Murali says it was “somewhat inevitable” that he would become a musician. Held by Hendrix, living with Santana, and dinners with Miles Davis are part of his unique story that has been growing since before he was born. Coryell has been inducted into the New York Blues Hall of Fame and was a 2014 BMA nominee for DVD of the year.On July 14, The Slambovian Circus of Dreams brings its eclectic musical style to the Bandshell stage. With styles ranging from ‘hillbilly-Pink Floyd’ to ‘folk-pop’ to ‘surreal americana’, the band is hard to define. “I guess we’ve accepted to some degree that we’re eccentric,” said guitarist and lead vocalist Joziah Longo. Just to keep things interesting, the band—aka The Grand Slambovians and Gandalf Murphy & The Grand Slambovians—shifts its name from album to album. “We figure if it’s got Slambovia in it, they’ll know who we are,” said Longo. Together since the ‘90s, the band, which originated as an art school project in Sleepy Hollow, NY, uses an extensive instrumental arsenal and taps a broad palette of styles. They have four critically-acclaimed studio albums to their name, with their fifth— A Very Unusual Head—due out later this year.On July 21, the Bandshell welcomes Peru’s Gabriel Alegría Afro-Peruvian Sextet. In their ten years together, members have cut five albums and honed their unique synthesis of folkloric Afro-Peruvian rhythms, jazz, and other musical strains. Founded in 2005 while Alegría was working toward his doctorate degree at the University of Southern California, the sextet’s mission has been to spread the joy and love of the music around the world. This has happened both on the stage and through workshops, master classes, after-hour hangs and even cooking (as food and music are inseparable in Afro-Peruvian musical culture, the band is never shy to demonstrate!) The band’s aptly-named tenth anniversary CD, 10, gives special care to both American and Peruvian standards. “We’ve brought together Jazz musicians with eminent Peruvian musicians, and we’re the glue that holds it together,” said Alegría. “We work very hard to make sure each of the traditions is employed correctly.”The 2017 season wraps up on July 28 with The Apocalypse Blues Revue. TABR was co-founded by rock band Godsmack’s drummer Shannon Larkin and guitarist Tony Rombola. On tour in 2010 and tired of metal and hard rock, Larkin and Rombola discovered one another’s affinity for the Blues and would jam without boundaries. Rombola describes TABR’s sound as merging traditional blues and heavier elements. According to Larkin, “Apocalypse Blues Review is a little heavier and a little darker, and has some punk rock attitude in the lyrics.” The band cut its self-titled debut album in 2016. “The musicianship is exemplary, the lyrics thought provoking, and the overall feeling, ominous,” said American Blues Scene.Concert-goers are encouraged to bring blankets, lawn chairs and, of course, their dancing shoes to City Park to experience great music in a natural setting. Listen to WEEU 830AM Stereo each week for artist interviews and weather-related schedule changes. Alcohol and smoking are not permitted in City Park.Berks Arts Council offers special thanks to the 2017 Bandshell Concert Series sponsors: County of Berks, City of Reading, Reading Eagle Company, and Land Displays.The mission of Berks Arts Council is to cultivate, support, and promote the arts in our community through collaboration, education, and presentation. In addition to the Bandshell Concert Series, Berks Arts Council presents the Berks Jazz Fest, Pagoda Awards and Fast Lane Art, administers the Pennsylvania Partners in the Arts Re-Granting Program, and provides art exhibition and marketing opportunities for member artists. Visit Berks Arts Council website at www.BerksArts.org for more information.