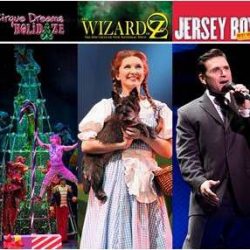 Come see a show from the 2017-2018 Broadway Series – Live on Stage to the Santander Performing Arts CenterReading, PA – We are proud to announce our 2017 – 2018 Broadway line up at the Santander Performing Arts Center. Single tickets will go on sale June 23, 2017 – until then you can purchase tickets exclusively by becoming a member of the brand new Santander Arena and Santander Performing Arts Center Membership Program!Complete with exclusive discounts, minimal fees, subscription flexibility, and personalized customer service, we have created the perfect Membership Program just for you! For just $50 per year, you can gain access to first selection of seats, exclusive discounts to select shows, customizable subscription packages, and more!  For more information or to become a member visit www.santander-arena.com/membership today!CATAPULTSantander Performing Arts Center – October 21 at 7:30 PM.An America’s Got Talent finalist from Season 8, Catapult features incredible dancers who work behind a screen to create magical shadow silhouettes of shapes from the world around us.  Be amazed as you watch their bodies transform into a mountain, an elephant, a dragon, even a helicopter!  You’ll never figure out how they do it, and you won’t know what they will create next – you’ll be surprised and delighted again and again.  Packed with hundreds of shape transformation, the show is full of humor, emotion and engaging stories.CIRQUE DREAMS HOLIDAZESantander Performing Arts Center – November 24 at 8 PM.Cirque Dreams returns for the holiday season with its critically acclaimed holiday stage extravaganza… Cirque Dreams Holidaze…an all new cirque show…Broadway musical… and family Christmas spectacular all in one! Hailed by The New York Daily News as a “delicious confection of charm, sparkle and talent by the sleighload & so full of energy it could end our dependence on oil!” Be amazed by this holiday spectacle with over 300 costumes, 20 acts and 30 artists from every corner of the globe.THE WIZARD OF OZSantander Performing Arts Center – January 17 and 18 at 7PM.There truly is no place like home as the greatest family musical of all time, the wonderful WIZARD OF OZ, twists its way into Reading! The entire family will be captivated as they travel down the Yellow Brick Road and beyond with Dorothy, Toto and their friends the Cowardly Lion, Tin Man and Scarecrow in this lavish production, featuring breathtaking special effects, dazzling choreography and classic songs.A spectacular celebration of the iconic 1939 MGM film, THE WIZARD OF OZ will blow you away from the moment the tornado touches down and transports you to a dazzling Oz, complete with munchkins and flying monkeys. Don’t miss the chance to travel Over the Rainbow and experience this national treasure on stage.JERSEY BOYSSantander Performing Arts Center – March 13 & 14  at 7 PM.The behind-the-music story of Frankie Valli and The Four Seasons.  They were just four guys from Jersey, until they sang their very first note. They had a sound nobody had ever heard… and the radio just couldn’t get enough of. But while their harmonies were perfect on stage, off stage it was a very different story – a story that has made them an international sensation all over again. The show features all their hits including “Sherry,” “Big Girls Don’t Cry,” “Oh What A Night,” “Walk Like A Man,” “Can’t Take My Eyes Off You” and “Working My Way Back To You.”RENTSantander Performing Arts Center –April 10 at 8 PM.The Pulitzer Prize and Tony Award-winning landmark rock musical written by Jonathan Larson, will return to the road in a 20th Anniversary production that promises to be as impactful and exciting as the original.A re-imagining of Puccini’s La Bohème, RENT follows an unforgettable year in the lives of seven artists struggling to follow their dreams without selling out. With its inspiring message of joy and hope in the face of fear, this timeless celebration of friendship and creativity reminds us to measure our lives with the only thing that truly matters—love.  The show received its world premiere off-Broadway at New York Theatre Workshop on February 13, 1996 to ecstatic reviews and transferred to Broadway on April 29, 1996. RENT is winner of the 1996 Tony Award for Best Musical as well as the Pulitzer Prize for Drama. It is one of only five musicals to win both awards.Single tickets will be available online at Ticketmaster.com and in person at the VF Outlet Box Office at the Santander Arena in Reading, PA on June 23 at 10am.