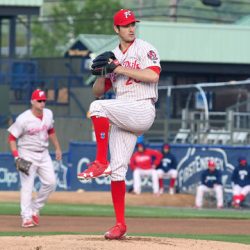 The Eastern League has announced that Reading Fightin Phils pitcher Drew Anderson has been named Eastern League Pitcher of the Week for the week of May 29th – June 4th.

This is the second time he has been named Eastern League Pitcher of the Week (May 8th – May 14th). Anderson is the lone Fightin Phils pitcher or player on the Philadelphia Phillies 40-man roster.

Anderson (1-0, 1.38 ERA) struck out a combined 13 batters in 13 innings throughout his two starts this past week. In his first start on May 30th against the Portland Sea Dogs, he gave up two runs (one earned), on three hits over seven innings while striking out eight batters Portland’s 4-2 win in 11 innings.

He made his second start on Sunday at Akron and earned the win in Reading’s 4-3 win over the RubberDucks. Anderson pitched strong as he gave up just one run on three hits while recording five strikeouts in six innings. He earned his fourth win of the season to improve his record to 4-2. The 23-year old finished ranked among the weekly league leaders in strikeouts (13-2nd), wins (1-tied 3rd), innings pitched (13.0-tied 3rd), WHIP (0.62-4th), and batting average against (.133-6th).