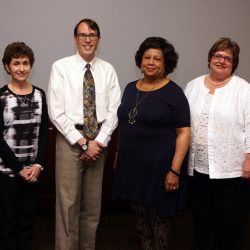 One of the first instructional design librarians in the United States, Shank is the founding director of The Center for Learning and Teaching at Penn State Berks. Instrumental in developing the Berks Educational Technology Grant Curriculum Program in 2002, he has directed more than 90 grant projects awarded to 60 faculty members. This program initially impacted more than 100 courses and more than 3,500 students.

Some of his contributions to Penn State Berks and the field of library science were included in his nomination letter from Nancy Dewald, reference librarian at Penn State Berks. The creation of the Media Commons and Collaborations Commons in the Thun Library, career-building opportunities for students interested in library science, and the co-founding of the Blended Librarian online community to help other institutions develop instructional design librarian positions are just a few of Shank’s contributions that have impacted students, faculty and the world.