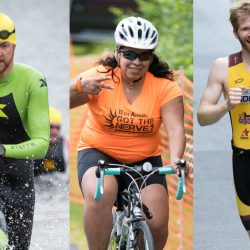 Each year the little town of Mt. Gretna is visited by hundreds of triathletes for the annual Got the Nerve? Triathlon all to support the IM Able Foundation. Now in its 14th year, the race is stronger than ever bringing in athletes from 19 states.

The Got the Nerve? Triathlon is a race for everyone. Over 2 hours athletes take part in a 500 yard lake swim, 16 mile bike and a 5k road race before finishing in front of Mt. Gretna Lake.

The race is one of the main fundraisers for the Wyomissing based IM Able Foundation. Founded by Chris Kaag, the IM Able foundation is dedicated to removing obstacles that prevent people affected by disabilities from being physically active by providing grants, resources and fitness opportunities.

The morning was brisk and the sky was cloudy but that didn’t stop athletes and spectators from enjoying the day. With one blast of the horn athletes quickly jumped into the lake to start them swim. Awaiting them was the pleasant surprise of warm water, heated by the 90 degree heat wave the week before. After running up the sandy beach athletes quickly made their way up to the transition area to grab their bikes. Leading the bikes through the streets of Mt. Gretna was Muhlenberg Township’s own Motorcycle Police escort. Flying back in athletes raced to racked their bike and head out on the pavement for the last leg, the 5k run.

It wasn’t too long for the first athletes to cross the finish line. The first through was Andrew Yoder with a time of 1:01:53. “He could have done the race twice and still won” said a spectator standing near the finish line. Yoder lead was impressive, however the Got The Nerve? Triathlon is more than just about crossing the finish line first. A few notable finishes include Andrew Kern, who crossed the finish line with a poster that read “I have Parkinson’s, it doesn’t have me”, Chris Saunders and Patrick Sweeney, who competed in relay teams with their adaptive bicycles.

The awards ceremony showcased the top athletes in each age category including a few special presentations. Bob Faryo was honored with the Tom Kaag Volunteer Award. The award is given out each year to a volunteer that goes above and beyond to make the triathlon run smoothly. The award is named after Chris’s father, who has since passed away, but always worked tirelessly to help make the Got the Nerve? Triathlon what it is today.

In addition to the awards, Michelle Wheeler received a new set of Zipp racing rims for her racing chair. Wheeler applied for the donation to help improve her racing time during competition. Wheeler will be heading to nationals held in Los Angles in a few weeks to qualify for the world games in London.

Summing up the day, Chris Kaag had one last inspiring message for the everyone. “I was only 21 years old when my diagnoses happened when I was a Marine overseas. Iv’e been using hand cycles for over 15 years. It’s amazing the amount of things we can do. Right now is the best time to be disabled, yes it sucks, but at the same time it’s so great that we have the abilities to get out an be active. Unfortunately being disabled is not cheap (referencing a $7,000 adaptive bike used in the race), for most its easy to get up and get around, but for a lot of the disabled community its not. I truly appreciate the money that is donated because it actively makes a difference in peoples lives and gives them hope to live the best life possible.”