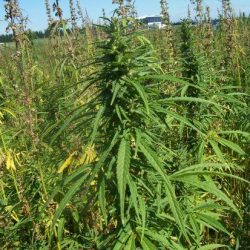 The project, focused on soil health, is one of 16 pilot hemp projects in Pennsylvania- the first grown legally in the state in 80 years

The PA Department of Agriculture Industrial Hemp Pilot Project granted 16 permits for research. It is the first time in 80 years that hemp will be grown legally in Pennsylvania. Rodale Institute was one of the permit recipients. Industrial hemp, a versatile plant grown for its fiber, seed or oil, was a valuable cash crop and a major industry in Pennsylvania for more than 260 years. Due to its close relationship to the marijuana plant, hemp production became a casualty of a 1933 law banning marijuana, and was later named a Schedule 1 drug by the Controlled Substances Act of 1970. However, changes made to the 2014 Federal Farm Bill now allow for hemp to be grown for research purposes by departments of agriculture or institutions of higher education.

Rodale Institute’s multi-year hemp research project is being partially funded by a generous contribution of $100,000 from Dr. Bronner’s. Overall cost of the project is projected to be $75,000-100,000 per year.

“We have the utmost respect for the values and mission of the Rodale Institute, and the paramount work they are pursuing to scientifically demonstrate the efficacy of regenerative agriculture and organic farming,” said David Bronner, CEO of Dr. Bronner’s. “Their new foray into hemp cultivation will reveal important data about the crop’s role in the sustainable agriculture systems of the future, furthering the evidence that hemp farming should be legalized throughout the U.S. so that all farmers can benefit from hemp’s economic and environmental opportunities.”

An additional $5,000 pledge of support for Rodale Institute’s hemp research was made by Nutiva’s CEO and founder John Roulac to contribute to the overall cost of the research. Roulac announced the donation at Hemp Industries Association’s Hemp History Week event, held at the Rodale Institute farm on June 5. Hemp History week ran June 5-11, 2017.

“This is an exciting venture for Rodale Institute, as we explore the implications that industrial hemp could have for organic farmers,” said Jeff Moyer, executive director of Rodale Institute. “This could give us an opportunity to expand farmers crop rotation, while helping farmers combat weed pressure, improve soil health, and sequester carbon. For us, it all comes back to healthy soil and regenerative organic agriculture. We know that Healthy Soil= Healthy Food= Healthy People and a Healthy Planet.”

Rodale Institute is conducting a four-year research project focusing on utilizing Industrial Hemp as a cash or cover crop to address weed pest issues and enhance soil health in organic agriculture. They are conducting two field trials (a Variety Trial and Weed Suppression Trial) and one greenhouse study. The research aims to identify which varieties of hemp will be effective for future use by organic farmers to manage weed pests and enhance soil health.

The Variety Trial will test several varieties of hemp that have been bred to produce higher yields and higher quality of fiber and/or seeds. This trial focuses on finding which types of hemp will grow best in a Mid-Atlantic climate and produce the most amount of fiber.

The Weed Suppression Trial will use hemp as a rotational crop in an organic system. The main weed pressure in this study comes from yellow foxtail and red root pigweed. Hemp fits well into a diverse organic crop rotation and its high biomass and canopy production has the potential to shade out weeds resulting in lower weed seed germination and growth. This trial will analyze how farmers can best compete against weeds by utilizing a crop rather than tillage. Tillage can destroy microbial communities in the soil environment and can result in a loss of organic matter.