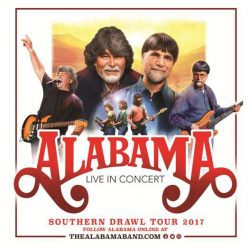 American Country and Southern Rock group, ALABAMA, is the band that changed everything. They brought country music to the mainstream and from side stage to the main stage. Alabama introduced rock style guitars, lights, pyrotechnics and sounds to the country audience.

Alabama’s success includes 43 #1 singles including 21 #1 singles in a row, a record that will likely never be surpassed in any genre. They have won over 178 CMA Awards, Grammy Awards, ACM Awards and counting. They’ve earned 21 Gold ®, Platinum ® and Multi-Platinum ® albums and were named the RIAA’s Country Group of the Century. They are members of the Country Music Hall of Fame and have a start on the Hollywood Walk of Fame. As they have for over forty years, ALABAMA continues to “Roll On.”

Tickets go on sale Friday, June 16 at 10am online at Ticketmaster.com and in person at the VF Outlet Box Office located at the Santander Arena.