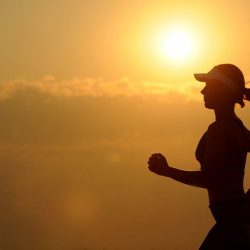 Reading, Pa. – Despite substantial evidence of the health benefits of regular exercise, getting people to partake in physical activity is a tough sell.

But new research from an Albright College psychology professor has found that the key to motivating people may lie in how exercise is promoted, namely as a short-term mood booster as opposed to the long-term physical payoffs.

The research, published in the journal Behavioral Medicine and co-authored by Albright assistant professor of psychology Bridget Hearon, Ph.D., studied 152 people with severe mental illness in a partial hospitalization treatment program, examining their willingness to exercise and the acute effect of exercise intervention on depression levels.

The researchers divided the patients into three groups:

Patients in the EM group, who had exercised before being admitted into the treatment program, actually exercised significantly more during their treatment than their counterparts in the EF or control groups, leading researchers to see the potentially positive motivational benefit of promoting exercise as an acute mood booster.

Moreover, regardless of group, the more a patient exercised, the lower his or her depression score was at discharge, “underscoring the importance of exercise for mood management and (supporting) the accuracy of an exercise-for-mood motivational frame,” according to the study.

“This is a proof-of-concept study and looks at how we sell exercise,” said Hearon. “Can we focus on short-term mood benefits over seeing the effects of exercise on waistlines, for instance, which takes weeks?”

The study notes that patients hospitalized for psychiatric symptoms may be less likely to commit to the long-term exercise behavior needed to realize physical health payoffs. And the study encourages future examination of the generality of the findings of an exercise-for-mood intervention with other populations.

“It doesn’t take being depressed to experience the short and long-term psychological benefits of exercise. The average person can also realize a mood boost from approximately 30 minutes of moderate-intensity activity, indicating this motivational focus may be particularly effective,” said Hearon

While the patients in the study were receiving other types of intervention during their treatment, Hearon was particularly encouraged that one, 50-minute group session encouraging an exercise-for-mood prescription resulted in measurable change in exercise behavior and depression levels among patients. The hope is more prolonged exercise-for-mood intervention would lead to even greater outcomes.