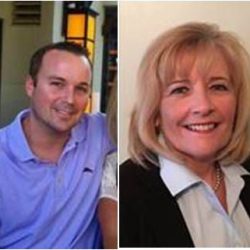 The Animal Rescue League (ARL) of Berks County is pleased to announce they elected Jon Chalmers and Connie D’Augustine to the Board of Directors.

“These two new members of the board of directors embody the spirit of service, and bring their valuable expertise and new perspective to the table,” stated Liz McCauley, Executive Director of the Animal Rescue League.  “We are very fortunate to have them on our ARL team!”

Jon Chalmers is co-owner of Chalmers Security Systems with experience in security systems, fire alarm systems, door access systems & video surveillance.  Jon along with the rest of the company sells, installs and maintains all of the accounts they acquire.  Jon is a 1991 graduate of Wilson High School and attended Penn State University.  In 1995, he started working for his Father’s company Chalmers Security Systems. Jon was born and raised in the Reading area and now lives in Exeter, Pa.   As an avid animal lover, he is dedicated to helping ARL fulfill its mission to save animal’s lives.

Connie D’Augustine, Vice President, Commercial Lending Officer at Riverview Bank works in the bank’s Spring office and serves all of the Berks region clients.  With more than 25 years of financial industry experience, D’Augustine has a bachelor’s degree from Alvernia University in accounting and is a graduate of Leadership Berks.  She is a graduate of Bell Leadership and of Dale Carnegie Leadership.  She also is a graduate of the school of Commercial Lending from the Pennsylvania Banker’s Association.  Born and raised in Berks County, Connie is a member of the Berks County Estate Planning Council, the Birdsboro Rotary and a founding member of Berks Women in Motion.  An animal lover, she looks forward to assisting ARL, specifically with finances and fundraising efforts.

The Animal Rescue League of Berks County is the only open admission shelter in Berks County accepting more than 5,500 animals annually.  The shelter runs at maximum capacity throughout the year, providing adoption programs, spay/neuter clinics, community outreach, education, animal welfare investigation and more.  The ARL’s mission is to impact all aspects of humane treatments of animals through quality service, accommodation and education of pet owners and the community.