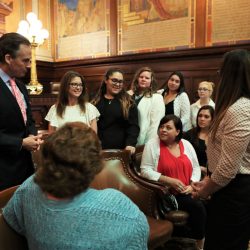 HARRISBURG – During a break in a more than eight-hour Board of Pardons session Friday Lt. Governor Mike Stack met with students of a Berks County technical school who are studying to be paralegals.

“Even the professionals who staff the pardons hearings find it to be a difficult and draining process,” Stack said.  “It was encouraging to see these students take notes and show focused interest.”

In the public hearings, applicants are given 15 minutes to come before the board in the Capitol’s Supreme Court room to present their case for pardon and answer sometimes probing questions from the board. At the end of each session, the board votes on whether to recommend the applicant for pardon to the governor, who has the final say.

Students from Berks Technical Institute traveled to Harrisburg to attend the hearing and put themselves in the position of board members.

“This experience was intended to show them the importance of being efficient handlers of legal papers,” said Carmella Hoover, paralegal program director at Berks Technical Institute, “but it also helped to put a human face on the people behind the papers.”

All the applicants in the public hearing have already passed a Merit Review Hearing.

Over two days last week, the board heard 60 cases originating in 33 different counties.  The applicants ranged in age from 25 to 67.  Many of the crimes occurred more than 30 years ago.   Fifty were recommended to the governor for pardons.

The next public hearing is scheduled for September.  For more information on the pardons process: http://www.bop.pa.gov