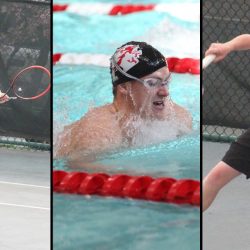 “These recipients represent the true meaning of a student-athlete,” said MAC Executive Director Ken Andrews. “This is one of the top conference awards we give out each season. It honors our student-athletes who excel both in the classroom and on the playing field.”

Muoio was also named All-MAC First Team in men’s tennis, complimenting his 3.84 GPA in business management and marketing. Muoio was named All-MAC First Team each year of his collegiate career. A two-time MAC Commonwealth Player of the Year, Muoio went 14-3 overall as a senior while posting a 6-1 record in conference play. He finished the season on a six-match winning streak. He was 11-2 out of the No. 1 position.

Trifoi burst on the scene as a freshman, capturing MAC Women’s Tennis Player and Rookie of the Year honors. Trifoi carries a 4.0 GPA in biology. Trifoi went a perfect 6-0 in MAC Commonwealth action this season out of the No. 1 position for the Lions. She also did not lose in non-conference dual match action. Trifoi is the first player to be named both MAC Commonwealth Player and Rookie of the Year in the same season since another Albright player, Victoria Foanio, earned those honors in 2011.