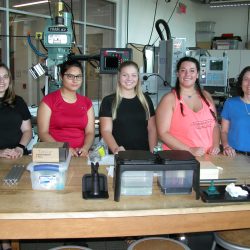 Among those participating in the FiERCE program between Penn State Berks and the St. Ignatius Loyola Regional School are, from left, Madison Wojciechowski, Gabriella Gonzalez, Anna Reed, and Marie Gervasi-German, all Penn State Berks engineering majors who served as program mentors, and Dr. Marietta Scanlon, the Penn State Berks lecturer in engineering who was awarded the grant to develop the program.
You May Also Like
Facebook Twitter Pinterest Email
Share

Thanks to the curiosity of a Penn State Berks faculty member and support from 10 Penn State Berks female engineering majors, nearly 60 middle school girls discovered not only the possibility of becoming engineers, but also gained the confidence to choose this career traditionally dominated by men.

Recognizing that mentors and role models are instrumental in recruiting and retaining women in engineering, Dr. Marietta Scanlon, lecturer in engineering and adviser to the college’s Society of Women Engineers Club, applied for and was awarded a one-year $19,000 grant from the Engineering Information Foundation, New York City.

Scanlon, a former computer science teacher at St. Ignatius in West Lawn, PA, said, “A secondary goal was to prepare and distribute resources so our program could easily be duplicated in its entirety in other schools.”

The planned yearlong program ran a few months longer because it was so successful, said Scanlon, who named it FiERCE (Females in Engineering Role-models Can Empower).

“We accomplished our goals by exposing students to a consistent series of activities that fostered creative thinking, problem solving, and real-world engineering, all the while encouraging and facilitating interaction among girls and women at various stages of development.”

The highlight was an engineering design project that mimicked the real world, splitting the students into several groups to work with their “clients” (teachers) to solve classroom problems in an organic way—better platforms to reach the whiteboard, disentangling computer wires, or better storage solutions for supplies. Other activities included a CAD workshop, 3D printing, “Float Your Boat” competition, career research, design assignments, dealing with engineering challenges, and a final product showcase.

“Throughout the FiERCE program,” Scanlon said, “the Penn State Berks mentors, middle school students, and engineers, when available, met twice a week to engage in purposeful, hands-on work that would provide a structured introduction to engineering in a fun, interactive way. We weren’t trying to get girls to simply like engineering. Rather we wanted to make them confident, and also teach them some soft skills.”

Among the lasting benefits of the FiERCE Program, according to a concluding survey by Scanlon:

• 90 percent were surprised how much FiERCE made them more interested in science, technology, engineering and math (STEM) and more confident in their abilities,

• 89 percent specifically grew to like science, including a third of the participants who had never liked science at all,

• 78 percent said FiERCE made them think more about how things work and 70 percent said they became more of a problem solver and learned to apply knowledge rather then just memorize it,

• 93 percent felt positive about their relationship with the PSU mentors, whose presence and mentoring were instrumental to the program’s success and who received Independent Study credits for their participation.

The reproducible and detailed modules that can be adopted for free by any interested teacher or college instructor and are available at www.sites.psu.edu/fierce.

Scanlon, who has taught at Penn State Berks for five years, said, “The overall success of this program cannot be understated. Clearly, they were influenced in a major and positive way by our FiERCE program.”